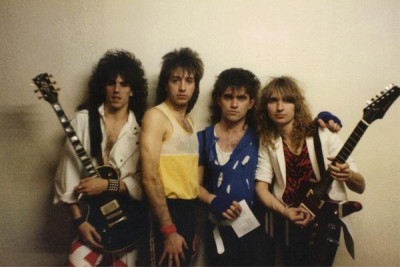 Saratoga were a Manchester based heavy metal band that gigged the North of England throughout the early to mid Eighties.

The band started life in late 1982 after rock blues band Mr Z failed to get the required notice on the circuit and re-formed after Paul Austin (vocals), Simon Winstanley (Lead Guitar), and Chris Paine (Bass Guitar), all left to pursue other interests.

Their debut gig at the Phoenix, Manchester was a smash as the blend of Heavy rock meets blues harnessed together with Noel Fraser’s superb melodies and lyrics, had work flooding in throughout Manchester and the North West.

Under the management of Nigel Coatman, who also had Deadly Embrace as one his bands, he went to work cutting out some of the excessive solos and getting Noel and Mike to concentrate on the bulk of the song writing.

The band also took an image overall and soon after re-employed Chris Paine on Bass to replace Alan Durham.

The band went on to gig all over the North West and released several demo tapes of their original music that was now regular sound plays on Piccadilly Radio, Friday night rock show.

The band went from strength to strength and soon got notice from Arista records but unfortunately this interest did not materialise and had a devastating effect on some of the line up.

Arguments and ego began to appear and the first causality of this was Grant Keers on drums.

Just before auditions for a new drummer were to take place in readiness for a debut EP, Noel Fraser left the band.

Noel would later re-emerge on the Manchester scene with AOK and as recently as The Worry Beads.

Brett took this opportunity to do other things and left for Germany.

Mick Walsh and Chris Paine, decided to continue on with the band and for the next six months wrote songs and looked around the Manchester rock scene for not only talented musicians but also like minded ones.

Grant Keers came back briefly on drums to help with recording demos the first of which for this new line up was recorded in 1984 with the songs, In a Child’s Eye, Josephine, and the bombastic Shout it to the Nation.

The band geared up with a new set of songs written by Mike and Chris, out went the blues flavour and in came a harder edged, melodic American metal fused sound.

The new line up featured two great captures taking personnel from two good Manchester bands at the time, Andy Chemney on drums from Sam Thunder and Loz Bailey on guitar from Strutz.

With Chris taking over the lead vocal duties the first gig was at Rock City in September 1984 as the band went on to play 32 dates throughout the North of England until the end of the year with a Christmas date at Jilly’s Rockworld.

1985 started in a similar vein with more new songs with better but more gigs. The band had momentum and as 1985 rolled on the band started getting university gigs as both a support act and headlining slots on their own merits.

With Blackpool, Preston, and Wigan been very popular areas of support in Lancashire and Halifax, Huddersfield, Bradford and Sheffield being as equally rewarding for the band in Yorkshire things were looking good for the band to break the North.

A big push was made to move away from these areas and further north into Cumbria and the North East but these were in the bands eyes baron lands.

Eventually the toll of endless gigging and writing started to take its toll on the band and in late 1986 Andy Chemney called it a day when he joined AOK.

The band rumbled on with a series of drummers throughout 1987 but never got back to its former work load in gigs. With the band no more than a rehearsal and recording outfit, Chris Paine left in June 1987, to work with other musicians.

Saratoga finally called it a day in January 1988 and like many bands at the time worked their butts off for very little reward other than lots of great memories tinged with a few tears too.
Artefact added : 6th December 2010
by Nick King

Sara80 Says –
LOL, Nightmare! The band brings back wonderful hilarious times of hair metal 80s. (sad). Toga back then were a good live act. Lots of fun, a great sound, good night out. I think at the time they were the only Manchester Metal band in a very ‘Indie City’ which made them different or out of date, something. Toga played original music some great some not so. Never could work out their influences, they had moments of Thin Lizzy or Journey, although clearly the lead singer was influenced by Y&T imitation sleaze. Absolutely desperately funny when he broke back into a Salford accent. When the band did hit on uniqueness; Shout it to the Nations, Josephine, Lost Nights and my favourite, Lights or something like that. This set them apart, different, something to listen to, edge. Sadly they did not pursue edge. Great days though. Crazy nights too. It must have been, for a bunch of missfits called ‘Sara's’ to trudge around the North. Anyone remember Leeds 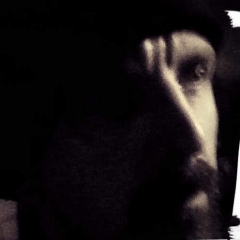 CosmicClown666uk Says –
I remember this band well. Only saw them twice at the Big Surrey in Glossop and my brother had a 4 track tape of theirs and I think one of the songs was called Trip To The Moon I think. Really good solid rock band. I remember my buddies and me approaching the big Surrey and the singer was belting out "only the crumbliest flakiest chocolate" it was brilliant and funny. Good days. So long ago. Different bloody world. Over n out!!!
If you'd like to leave a comment, please Login. Login
Manchester Digital Music Archive is licensed under an
Attribution-NonCommercial-ShareAlike 4.0 International License.
Charity no. 1164179
Our archive currently contains 3819 Bands, 743 DJs, 1437 Venues, 298 Industry Professionals and 28962 artefacts contributed by 3936 members.