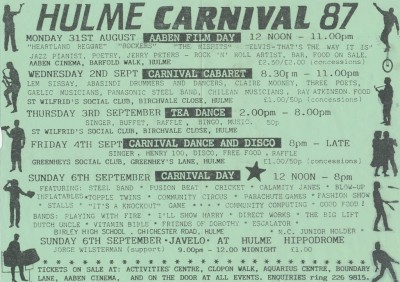 OT Says –
i saw a film called 'shocking asia' about 5 times at the aaben. i think maybe the owner (john?) must've had his own print. as i recall it was about the sex industry in the east... also i remember a whole weekend of woody allen films. i went with my mate paul and we were the only one's in the whole place all day. a bit different to the many showings of batty blue they had - always a fistfull (!) of dirty old men sniffling and shuffling around to that!
If you'd like to leave a comment, please Login. Login
Manchester Digital Music Archive is licensed under an
Attribution-NonCommercial-ShareAlike 4.0 International License.
Charity no. 1164179
Our archive currently contains 3873 Bands, 759 DJs, 1464 Venues, 323 Industry Professionals and 29791 artefacts contributed by 4061 members.