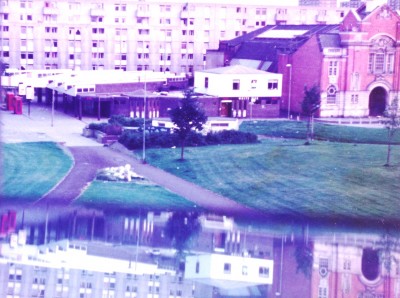 An overview of the Hulme Carnival playground in front of Charles Barry and facing the back of John Nash Cresc. The shops with the best/worst chip shop in the world, “The White Hor..” as it’s named in this photo, and The Zion Building (featured in the film “Reds”) stand in between. I must have been going through a particularly David Bailey phase ‘cos I took the pic through one of the tilt windows (for ease of cleaning when you’re so high up), and was trying to artistically capture the nuances of light and reflection of the panoramic view before me; I’d give meself 6 out of 10 for effort ; not so sure about style and content.....
Well that’ll do for photos for this particular lot of uploads; must say it brings back some nice memories and makes a nice change from just scanning flyers... That gets pretty dull and boring after a while, hence why I prattle on sometimes, to stave off the boredom and tedium of just click click clicking, and prevents me from nodding off; I hope it’s all worth it though. It’s a good thing to put faces and characters to events and location, sort of brings it more to life I think. I should have photos of The Russell Club and out and about round town so if I find any that are worthwhile and relevant I’ll put them up.
Happy Yuletide y’all; off to nail up the entrances and stick some barbwire up the chimney before the fat intruder endeavors to stick more coal in me shoe like every other flippin'year....Peace and bless!

OT Says –
Merry Christmas to you Mr Dubwise-er - you've made our site a much richer place over the last few months. Good on ya...

dubwise-er Says –
Ta very muchly b.u. It's a good thing you do, so I'm glad all this stuff has finally found a home. Manchester Vibes In The Area! Hope 2011's a corker....
If you'd like to leave a comment, please Login. Login
Manchester Digital Music Archive is licensed under an
Attribution-NonCommercial-ShareAlike 4.0 International License.
Charity no. 1164179
Our archive currently contains 3831 Bands, 752 DJs, 1452 Venues, 303 Industry Professionals and 29436 artefacts contributed by 3983 members.