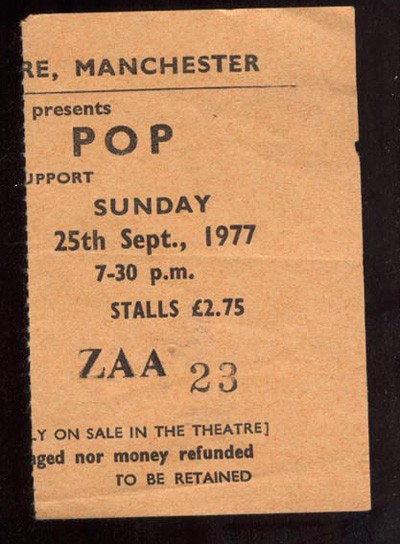 Iggy Pop back at the Apollo. "25th September '77 is the gig where Iggy had the horse tail hanging out of his arse" says Kevin Cummins.

This concert was filmed by Granada for Tony Wilson's 'So It Goes' programme and was an important gig for Manchester punk. Iggy swore live on telly causing a lot of complaints, and speeding up the downfall of So It Goes...

popsq Says –
I was at this gig. Great gig with support from The Adverts.
If you'd like to leave a comment, please Login. Login
Manchester Digital Music Archive is licensed under an
Attribution-NonCommercial-ShareAlike 4.0 International License.
Charity no. 1164179
Our archive currently contains 3760 Bands, 739 DJs, 1426 Venues, 286 Industry Professionals and 28012 artefacts contributed by 3879 members.