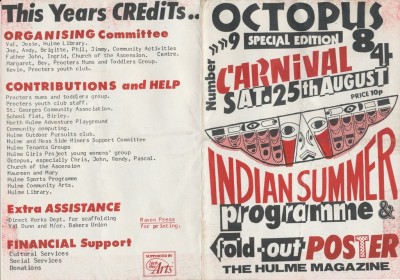 Well we're off into 2011 and thankfully, the world still hasn’t ended yet.....I’m sure there’s some waco American religious sect pretty cheesed off about that, bless ‘em. Some more “stuff” to finish off what I uploaded earlier in the piece. This one from Hulme Carnival ’84. The Octopus was actually a local community paper of which I have several but that’s for the Hulme site somewhere down the track.
There was a body popping comp and bingo on the day; what more could one ask for...?A few local bands on as well, Big Flame probably being the best known.