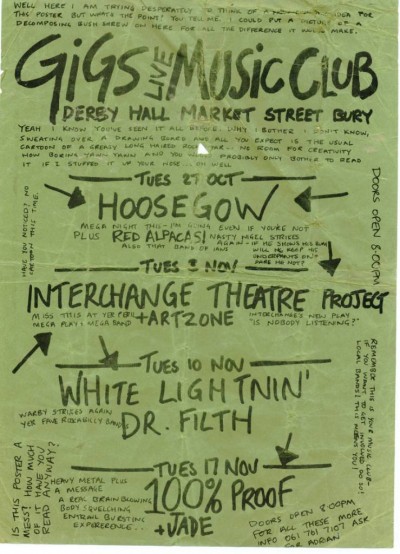 Detailed annotated flyer for Gigs live night at the Derby Hall Bury, White Lightnin' and Dr Filth were Manchester bands, not sure about the others as not listed on this site.

There was a connection between the two bands although they were musically very different:
Mark Coley had played bass in White Lightnin' and The Renegades before Dr Filth,

Dave Machin, who had drummed in The Renegades later played in the Rhythmaires with most of White Lightnin'

other bands unknown to me, but if you have details add them on to the list and drop me a line so I can update this
Artefact added : 5th January 2011
by bornred

shadow Says –
Wasn't the Interchange Theatre Project something put together in the back room of The George and included the guy who plays Zac Dingle in emmerdale and Fiona Allen (amongst others)?
Not musical, just culture!
Stuart

Shaker1960 Says –
This was 1981 Phil (I've just verified on one of those 'perpetual calendar' thangs). Thought so as I think it was around Sept 82 when we'd become The Rhythmaires.
Dr Filth's lead guitarist Paul 'Tot' Thomas was also ex-Renegades. Dr Filth's series of 'dep' drummers included Alex Sidebottom of The Distractions and John Maher of The Buzzcocks.
Steve Halliwell (aka Zak Dingle) did indeed write and direct plays (in fact I had a part in one!) at the Derby Hall though I think the 'Interchange' project was a different (more political?) troupe.

bornred Says –
Thanks Stu, I've corrected it, that means I was all of 15 years old at the time then
If you'd like to leave a comment, please Login. Login
Manchester Digital Music Archive is licensed under an
Attribution-NonCommercial-ShareAlike 4.0 International License.
Charity no. 1164179
Our archive currently contains 3861 Bands, 758 DJs, 1458 Venues, 316 Industry Professionals and 29644 artefacts contributed by 4033 members.