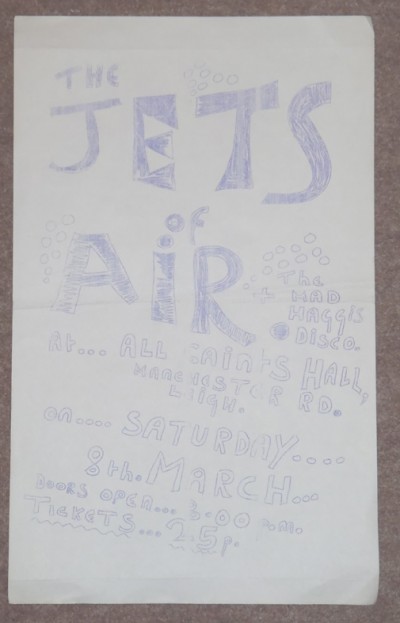 Jets of Air was formed in 1973 by Pete Shelley who would later find worldwide fame with Buzzcocks. The band consisted of Pete Shelley on guitar (who was then known by his original name McNeish), Tony Wall on guitar, Steve Christie on drums and Garth Davies on bass.

Jets of Air played a handful of gigs in the north of England up until when they split on the 23rd May 1975. This flyer may therefore be for the last gig the band ever played. Six months later Pete Shelley would meet up with Howard Devoto at the Bolton Institute of Technology and the rest, as they say, is history.

This is a flyer for a gig at All Saints Hall, Leigh, Manchester on Saturday 8th March 1975.
Artefact added : 9th January 2011
by bolection

OT Says –
rollins is a huge punk collector... he must have the biggest punk collection in the world by now

FranDaman Says –
How do we know this and do we know what he paid for it?

FranDaman Says –
That's quite a lump for a sheet of paper!
I remember hearing (and this may be an urban myth) that Stuart "Psycho" Pearce is a huge punk fan and avid collector!

bolection Says –
I agree...crazy price. Yes, Stuart Pearce is a huge punk fan. Legend has it he used to psyche himself up before the England matches by playing NMTB on his Sony Walkman!

Tony/Longfella Says –
The Pistols reformation in 96 co-incided with the height of Pearce's fame after a major tournament. He got to introduce the band for one of their shows, London presumably. He dragged Gareth Southgate along reluctantly.
If you'd like to leave a comment, please Login. Login
Manchester Digital Music Archive is licensed under an
Attribution-NonCommercial-ShareAlike 4.0 International License.
Charity no. 1164179
Our archive currently contains 3605 Bands, 692 DJs, 1317 Venues, 206 Industry Professionals and 19402 artefacts contributed by 3517 members.