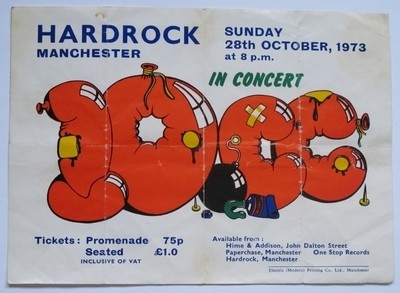 The description of the Hardrock as a "concert theatre" is a bit rich! I can remember it when it was a bowling alley.
That long low room led to problems when there was a good crowd in. When the Faces played there a year or so after this their drummer, Kenny Jones, passed out from the heat and had to be taken to hospital.
No such problems at this gig. The audience consisted of a load of "heads" who had probably picked up on the band from John Peel standing at the back and a bunch of teeny girls at the front (Donna and Rubber Bullets had both charted before this gig). Somewhere in between were me and my mates including one Jon Ormerod, later better known as the Postman of this parish.
Artefact added : 1st February 2011
by FranDaman

nobby Says –
this place sort of paralled my life- I used to hang out in the bowling alley as a scooter rider- trying to be a Mod but I did get a couple of girlfriends and made some lifelong mates, and slightly later attended some epic gigs, like Thin Lizzy (loudest I've ever heard, I was deaf for several hours,and I went to Led Zep at UMIST in a totally wooden room- floor, walls, ceiling, and they were not as loud as TL, ) Hardrock had some kind of overhead PA, which when me and my bro saw Traffic with the Muscles Shoals Rhythm Section (Barry Beckett et al) was used to great effect, however the late Chris Woods was off his trolley and at one point fell off stage. Then again me and bro saw early Roxy Music, with Eno doing his stuff, memorable! But this all leads me to one of the best gigs I have ever been to in my miserable life, BOB MARLEY AND THE WAILERS! Support band was Third World! When Bob came on the place exploded, and I have to say, never been beaten even by BB King or anyone else.

bilko21 Says –
Nobby & Fran - can you get in touch ? writing book about The Hardrock and would love to hear your recollections cheers Bill

shirley Says –
Bill, I am very nostalgic about the Hardrock and have lots of lovely memories of the place. I only have to hear a certain song and I am transported back under those ultraviolet lights and can smell that heady mix of patchouli, musk and all sorts of cigarettes! It;s great to see the artefacts - I was at many of those gigs shown; sadly I don't have any artefacts myself, except what's in my head! I wish you all the best with your book and would be very interested to read it. Shirley

marcegol Says –
Hi there: I was seeking fot a vintage pic of this place for my book about Historic Rock Places in Manchester, to be released in Argentina this year. Do you allow me to use it for the book? Cheers

FranDaman Says –
marcegol feel free to use any image I have posted.
If you'd like to leave a comment, please Login. Login
Manchester Digital Music Archive is licensed under an
Attribution-NonCommercial-ShareAlike 4.0 International License.
Charity no. 1164179
Our archive currently contains 3714 Bands, 737 DJs, 1367 Venues, 252 Industry Professionals and 26448 artefacts contributed by 3774 members.