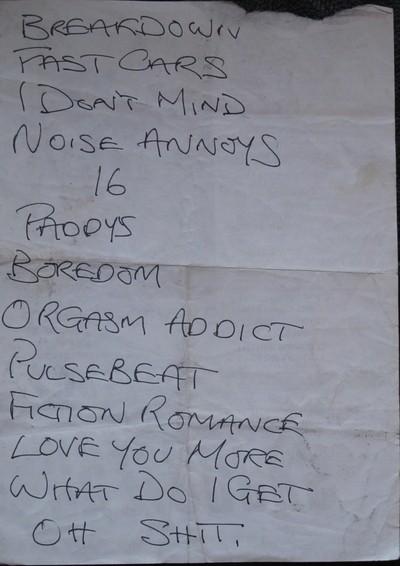 Set list from the Mayflower on 1978 tour with Slits. (25/26 March 77) How can I be so sure? Well this is on the reverse of a flyer shown elsewhere on MDMA
www.mdmarchive.co...

P.S. It now occurs to me that this is Pete Sheley's handwritng. The reference to "Paddy's" gives it away. That tune later became known as "Walking Distance" one of two instrumentals which were recorded at a Peel Session 10 April and first broadcast 17 April 77, the other was "Moving away from the pulsebeat".
Artefact added : 2nd February 2011
by FranDaman

Landshark Says –
John Cooper Clarke was an added bonus on the night - I think there was some kind of Teds convention at the Kings Hall that night & me and my mate were chased down the road by a couple of old blokes with quiffs &brothel creepers shouting 'get the f'in punks' (I say old but they were probably only about 30 - seemed ancient to us at the time!) thankfully I was a bit nimbler in those days and we got away - brilliant night!
If you'd like to leave a comment, please Login. Login
Manchester Digital Music Archive is licensed under an
Attribution-NonCommercial-ShareAlike 4.0 International License.
Charity no. 1164179
Our archive currently contains 3637 Bands, 718 DJs, 1332 Venues, 227 Industry Professionals and 20730 artefacts contributed by 3556 members.