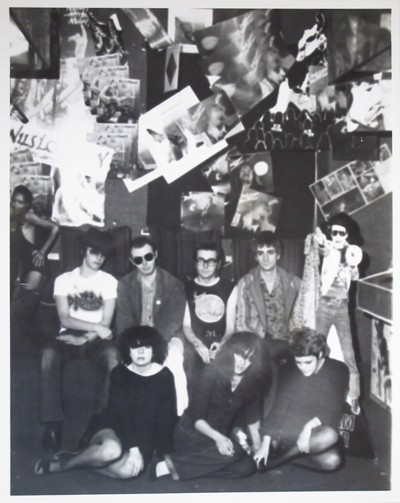 Picture of the band taken in the listening booths at the old Virgin Records.
They are Back row L-R Kevin Cummins (drums), Richard Boon (sax), Merlin (guitar), Paul Morley (voice). Front row L-R Stephanie, Carol, Jodi (backing vocals).
Stephanie was drummer and Jodi bassist in Manicured Noise (I fancied Jodi like mad!).
Carol shared a house with Pete Shelley when he lived in Gorton, I heard she later also worked behind the bar at the Hacienda.
Artefact added : 8th February 2011
by FranDaman

Iris Says –
FranDaman great picture. Do you have more of the old Virgin Records?

FranDaman Says –
Iris - I'm afraid that's the only one.

Keith Says –
Met Carol when we stayed overnight in Pete's house in Gorton. I remember there were no tiles only bare earth in the kitchen. Funny what you remember. Pete played me the pre- vinyl recording of Late for the train.

Keith Says –
FranDaman were you Fran the Buzzcocks roadie?

FranDaman Says –
'Deed! I lived in that house in Gorton, when most of the area was crofts. Just the Mayflower, Belle Vue and the little market/precinct the only things above ground for miles.

Groth Says –
Any idea who took this Fran?
If you'd like to leave a comment, please Login. Login
Manchester Digital Music Archive is licensed under an
Attribution-NonCommercial-ShareAlike 4.0 International License.
Charity no. 1164179
Our archive currently contains 3661 Bands, 725 DJs, 1339 Venues, 232 Industry Professionals and 22070 artefacts contributed by 3597 members.