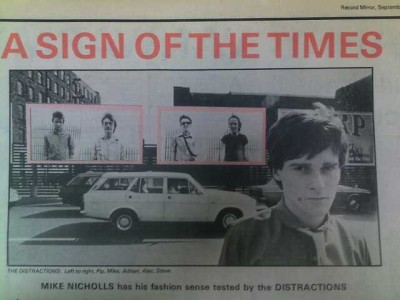 MIKE NICHOLLS has his fashion sense tested by The DISTRACTIONS

WHAT A funny old world. There go Squeeze raking in the ackers but without a new sock in sight and here come The Distractions, who'd rob for a bob yet dressed to the nines.

Mike Finney looks well pleased with his himself after a successful shopping expedition. Inside the reception room at Indigo-Arrow Studios we can hear him trotting all the way down from Deansgate, Manchester's busy commercial centre. That's because he's wearing well-heeled black winkle-pickers.

"Just look at the shine on them!" he beams with a smile as bright as his shoes. Rising above the ankles are a pair of de rigeur pleated flannel pants, which, as Mike is at pains to point out, possess a waist-line of of a mere 29.

"That should knock all this Billy Bunter of rock (as one rag suggested) nonsense on the head," he decided, while juggling with a 2 1/2 yard long roll of cream cloth. The latter will metamorphosise into a right dandy dinner jacked for our rising star.

"Well, there goes your street-credibility," admonished Steve Perrin, himself looking quite dapper in tab-collared purple shirt and contrasting polka-dot tie.

Steve is one of the two guitarists with The Distractions. Mike is lead vocalist, more by fluke than intention. Both were friends at Stockport College of Technology - or rather acquaintances.

"He always used to sing at the back of the class," recalls Steve. "I wouldn't have minded, but I could never get any bloody sleep!"

Ha! Overtones of the Undertones. What it did mean, however, was the nucleus of a band. T'other guitarist, Adrian, was recruited from a music paper ad, and like Mike is 23, a year older than Perrin, the bassist is a cute, elfin-like figure who goes by the unlikely name of Pip Nicholllls.

Petite and blonde, she resembles nothing so much as a less vicious version of Toyah Wilcox. Pip was presented to the boys by no lesser personage than Pete Shelley after she failed an audition to join Buzzcocks in the summer of '77. The friendship between the two bands continues.

"A nice guy, Pete," reflects Steve, "but have you noticed how quiet he goes in front of the bar? Soon as it's his round he starts moaning about poor record sales!"

Anyway, unable to replace Dephoto Devoto, Pip ended up with a group which went on to play a number of support gigs to baldy's old band. First there was the original punk hangout, The Ranch, followed by a full house at Rafters and other odd gigs "To give all Manchester correspondents in the music press a break!"

One of these was a pub gig where the band played with a group which was later to call itself The Smirks. I mention to The Distractions how I remember being talked into going by Smirksman Ian Morris while we were both waiting to sign on.

"Sign on? You?" exclaims an astonished Mr Finney. "Actually, I had a funny experience at the dole office the other day," he begins, always ready with a daft anecdote.

"This fella said, to me: "I'd like a word with you," then he asked me to autograph this record! Then he said "how come you're signing on when you're in a band?" He didn't believe me when I told him we weren't making anything out of it, so I said he ought to try coming to one of our gigs!"


THE record autographed was the Distractions sublime 12 inch four track 'You're Not Going Out Dressed Like That' EP, which, due to the ambiguous pressing policy of their former label, has been deleted. The original deal was that after 6,000 copies had been sold, the group would get a share of the royalties.

The band have a strong suspicion that only 4,000 were ever pressed, which means so far they haven't seen a red cent - or even a copy of their own record for that matter.

"It's ridiculous," says Adrian. "Our own sisters haven't been able to find them, yet we've had thank-you letters from Frankfurt and Holland saying how great it is!"

Ever cheerful, recent events show things looking up for The Distractions. At the moment they are being managed by Brandon Leon, their producer and meantime master of ceremonies at Indigo-Arrow. A compact, hyperactive character, Brandon is presently doing a tour of the record companies, with some very encouraging results:

"EMI read a feature about us and were immediately interested in us (hint: It wasn't Jimmy Parade's one-word review of the single, which like the band's reaction to it, is unprintable), they didn't give a damn about the way we sound!"

Another label is also mentioned. "Yeah, that would be alright," opines Mike with a glint in his eye, "the same one as Suzi Quatro!"

At that point the fifth member of the band makes a belated appearance. The drummer, Alec, looks like the wreck of the Hesperus at the best of times, but on this particular occasion he'd just come back from Greece. He didn't just come back weather-beaten, he appeared to have travelled back on the rough end of a tidal wave. Either that, or dragged backwards through a coal mine.

He started wafting through the music papers. "Betta catch up with the news," he announced while complimenting the Greek grasp of UK rock 'n' roll. "They had all the British imports out there, you know," he discloses, rubbing a cold sore. "The Ruts, an' all that!"


IT transpires that Alec is about the only one in the band with a day job, which explains his ability to afford fancy continental holidays.

What do you do?

"A'hm a carpet fitter," he replies as the others subside into merriment. Nothing wrong with that. We all like a bit of shag-pile don't we?

"And he lives over the brush," pipes up Mike for no particular reason, "that's the trouble with this band - there's too many people shacking up."

But of course. Actually he was once a social worker, while Mike himself describes himself as a professional coconut shaker. And Pip? She's a "freelance vegetable grower."

"I tried cultivating come marrow and cauliflower," she demures, "but I planted them too late so there's no sign of them yet. Still, the beetroot have come up alright - and the peas."

My, what we find in Record Mirror features these days - fashion hints, gardening tips, the Greek disco scene... but what about their music? Well let's begin by saying The Distractions have obvious commercial tendencies, something which characterised their sound long before the whole powerpop schtick became unschtuck. They run the whole range of influences from The Beatles to the Groovies and the Velvets, while retaining an identity of their own - particularly in the visuals dept, where Mike's mode of apparel often gives the impression he's bent on starting the new craze of Civil Servant Rock.

Apart from the 'Dressed Like That' tracks, material includes songs with such titles as 'Waiting for Lorraine' -
an old hobby of Steve's - and stage fave, 'Still It Doesn't Ring.' Next waxing up to be 'Pillow Fight' and 'Time Goes By So Slow' which will be released on Factory Records in wonderful seven inch black vinyl. What about when the big dotted line is signed. Will a move to The Smoke be on the cards?

"Nah," replies Mike, "Too many mods down there." "Yeah," adds Steve, "It's a pity there hasn't been a rocker revival at the same time."
Artefact added : 14th February 2011
by granata