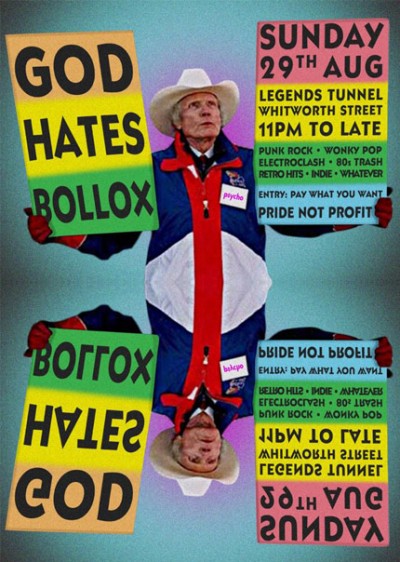 Manchester Pride has been a success for the city for many years, sadly it seems very money motivated - club nights hiking up door charges etc... We decided to go against that and do a 'Radiohead" by letting customers decide how much they wanted to pay to gain entry to the club. i think the lowest amount was about 30p and the most was £20.

The night sold out by midnight which was a great acheivement considering the legendary Flesh clubnight was making it's manchester return across the road at the same time.

At the end of the night the money was split between the DJs that played and the George House Trust charity. No profits wer made and we had a fantastic time in the process. definately going to do more pay what you want events in the future.

The artwork was a play on the anti-homosexual propagandist (knobhead) Fred Phelps. We were gonna gay him up, but run out of time.