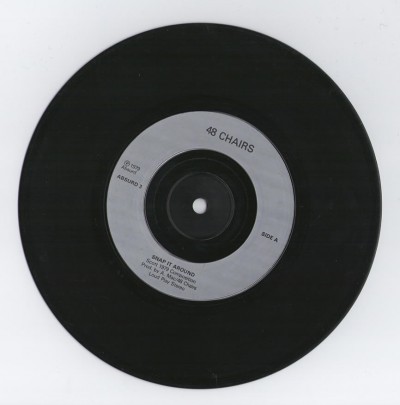 John Scott first came into 'Bootleg' with the 'Alberto's and from then on I did a lot of recording (and drinking) with him and Mogs, this record was the original 'Snap It Around' which was recorded by the now legendary Andy Mac, this record was chosen as one of Frank Zappa's top ten favourite singles on the radio!! being a massive Zappa fan myself I regarded this as a serious achievement.

The reason I have this copy is because John wanted to re work it, considering the above paragraph I have no idea why, it must be remembered that this record was recorded at Revolution when it was just an 8 track and the 8 track Otari MX5050 and Amex 'X' console I bought off Andy for Bootleg after Revo went 24 track.

Note: John and I got up to many drunken pranks once our sessions were finished, one time we kidnapped a female singer from someone elses session whilst she was in the middle of a take and took her to the pub local promoter 'Naviede' and my partner Roger were upstairs in the control room had no clue where she had gone to we returned here a bit drunk!!!!

I used to like working with John as he was a great guy and a good musician, one thing I always remember was he used to keep track of the bars in a song by laying out matchsticks on the studio floor and then moving them out of the way as the bars past!!!
Artefact added : 15th March 2011
by philplatt