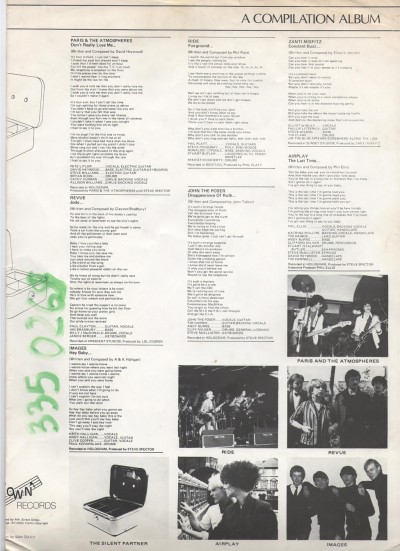 This was the other side to the insert, this has my track 'Fairground' included, nowadays some people say I ripped the title off, however careful inspection of dates says I didnt!

Fairground was actually the 'B' side of my single 'Half Ten Closin Again' unfortunately I managed to confuse everybody as the single did not have a 'B' side, it had a binary Side Zero and a Side One, (B always sounded second class to me).

Why did I put Fairground on the single and on this album? the answer was we only had the two tracks recorded as the Ride was a new band then and they were in a hurry to press the album, we desperately need to have any track on this album as this would give us three tracks on release which meant Steve and I automatically became members of the PRS and could then collect royalties on any airplay etc.! (Three was the minimum to join PRS then).

All in all the album was a strange affair with a huge variation of styles but it was a great representation of what was happening in Stockport at that time, it was a strange kind of alternative window which slotted in between the late 70's and early eighties of the Stockport music scene providing a break from the 60's pop,Blues,R&B and Jazz cult which Stockport is more well known for.

Note: The Ride piccy is taken at 'Rafters in Manchester, this was taken at the albums launch party so there was no album out at this time to launch!! you cannot see proper ifrom this photo but I am dressed up as half a business man and half a punk, I even had half a beard and tash, Saxophone was Stuart Butler later in 'The Knives' Drums was Mike Doherty later in 'The Smirks & The Freshies, Steve Ridgway on Keys and Ron Poole later 'John Cooper Clarke and George B's Fabulous Wonderfuls
Artefact added : 15th March 2011
by philplatt