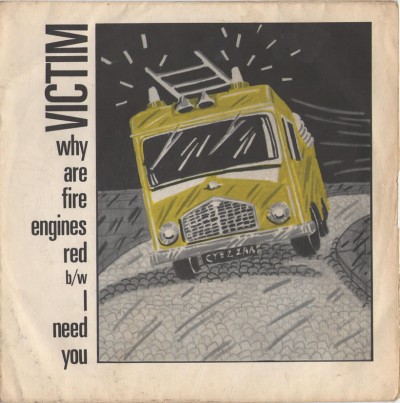 This is one of Victims singles recorded before Me and my brother joined them, the reason I have this was to learn it for the live gigs, the first single was called 'Teenage' but I cannot find that, Victim had a big punk following at the time due to their appearance in the US film 'Shellshock'.

The bands manager was TJ Davidson who had a large mill in Manchester which he used as rehearsal rooms, I also played in another band from this stable called 'Airshcool' with Russ Harrison later of 'Playing With Trains' other bands who rehearsed there at the time were: V2, Salford Jets, Buzzcocks, George Borowski's 'The Out' and loads more I cant remember, (Always a gig to go to when yah finished rehearsing, f***ing freezing in there!!!
Artefact added : 16th March 2011
by philplatt