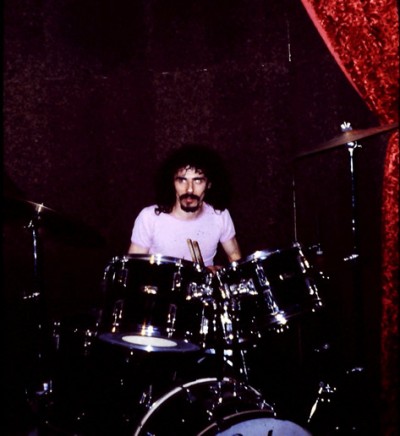 Another photo of 'The Captain' drummer from 'The Knives', many punters thought the name had violent conotations but they were completely wrong, the name was actually short for Hot Knives which was how they smoked their errr..
'tobacco' by squashing it between two knives that had been heated up till red over a gas ring!! no violence after that folk's you were lucky to stand up straight!!
Artefact added : 16th March 2011
by philplatt

graham Says –
Was Phil Kirby (Yargo, Biting Tongues, the French) in the Knives for a bit as the drummer?
Pretty sure Tom Barnish (Trombone-Biting Tongues)
was in them , saw them at the Lamplight in Chorlton.

curbsfan Says –
I remember seeing a band called The Knives at Kelly's on Amber Street in the autumn of 1978. Hot band.
If you'd like to leave a comment, please Login. Login
Manchester Digital Music Archive is licensed under an
Attribution-NonCommercial-ShareAlike 4.0 International License.
Charity no. 1164179
Our archive currently contains 3727 Bands, 739 DJs, 1398 Venues, 255 Industry Professionals and 27258 artefacts contributed by 3811 members.