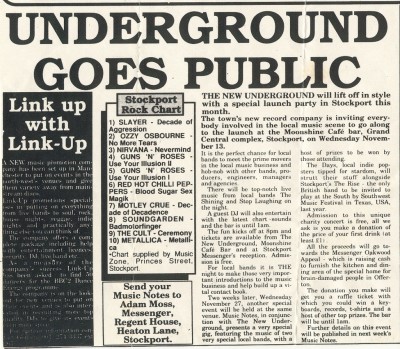 The New Underground was run from my shop/office in Hazel Grove, it was a small kind of musical 'umbrella' of companies really consisting of, Pyramid Audio a music shop with an audio company and office above it, also it had a 24track digital studio underneath my house in Disley and a 12 track mobile studio built into a Sherpa van, the idea was to record the bands live on a gig and then take the tapes back to my place where they could be locked up to the 24 track stytem as they were the same format.

We also put on showcase nights every Tuesday at 'The Moonshine Cafe Bar' in the complex in Stockport as well as other local gigs.
Artefact added : 17th March 2011
by philplatt