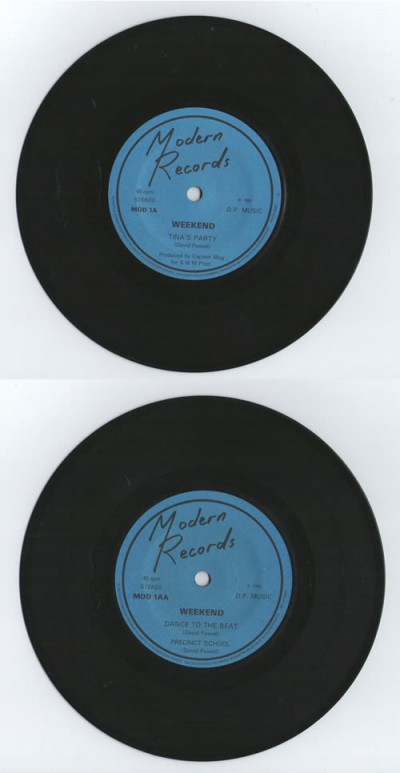 An EP 45 Single
A Side:Tina's Party B Side: Dance To The Beat & Precinct School, this record was done by a guy called Dave Powell and from what I can remember he was a mate of Ian 'Mogs' Morris from Sale, this being the case it also featured The Smirks as backing band and loads of other people, who the f**k was Tina anyway? don't ask me there were loads of women there at the session who could have all been called Tina for all I know!

I seem to recall this being more being like a party anyway than a recording session which was most appropriate considering the title, all a bit of a haze really but good fun captured on the record, done in the usual format of me doing the recording and mixing and Mogs producing, I did loads of stuff with Mogs and the other guys like this, Weekend, Smirks, Bet Lynches Legs, 48 Chairs, Capt. Mogs & Private Sigh, no worries working with any of these bands coz they were all the same guys!!!

Sessions in them days were much more fun all round, drinking, smoking and laughing were the norm and the bands expected the enginneer to join in so you were on the same level as them, we always did great stuff really quick then off to a pub, club or party later.

I think this way of working gave the stuff an edge which is hard to achieve using just technology, you could not smother everything in 'Daz' in them days as there was not enough to go round!!, we only had a stereo reverb and a Space Echo then, you just had to put fun on it instead, this is why all these old recordings have a unique rough raw sound, every record sounded totally different because you had no choice, no samples, loops, harmonizers or PC sequencers, just good songs,musicians and mics were all you needed, a few beers and stuff and off you went.

If you want to know more about The Smirks check out the link I included, the site is run by Ian (not Mogs) who has been doing the Smirks site for years, great photo's, songs, info and more.

This record also has the 'A Porky Prime Cut' etched in the blank bit after the groove, this one reads:
Who's Brian Day? then etched on the B side it reads; He's Me.......
Artefact added : 17th March 2011
by philplatt

cawright1 Says –
Check out Beau Leisure (on here) Dave Powells superb synth band, post this release. They can also be found on Facebook.
If you'd like to leave a comment, please Login. Login
Manchester Digital Music Archive is licensed under an
Attribution-NonCommercial-ShareAlike 4.0 International License.
Charity no. 1164179
Our archive currently contains 3870 Bands, 758 DJs, 1461 Venues, 323 Industry Professionals and 29719 artefacts contributed by 4047 members.