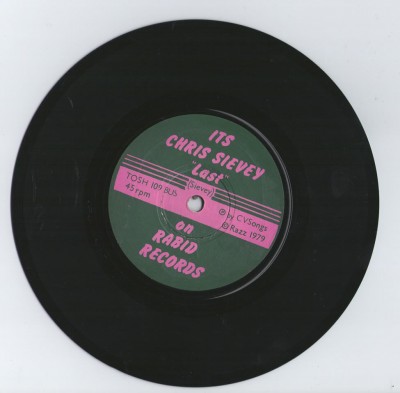 This is the flip to Baiser, not sure whats going on with this record really it's a bit of an odd one, no A or B side (Have a feeling A side was Baiser) it's got Tosh 109, Rabid, CV Songs and Razz Records, all I can think is that it was a joint release between Tosh Ryan/Rabid and Chris CV/Razz.

Tosh is marked on the etch with Porky which means he was in the cutting room when it was cut as it has etched 'Another Porky Prime Smacker + Tosh 109 + Frog.

People used want to be at the cut so they could hassle the cutting man to cut at Max headroom so their record would be (((LOUDER))) than all the others on the jukeboxes, (Cutters left to their own devices would go on the lower side of the line to be safe so this could mean that yours was not as (((LOUD))) as all the others on the jukeboxes!!) they would be happy to do this but if there was any problems with the main run and you didnt have a white label run off first it was on your head cos the etching said so!!

les murphy Says –
I had the good fortune to meet Chris on a train coming home from London to Manchester circa early eighties and had an interesting conversation with him about Mancunian bands and musicians. Thouroughly likeable chap and a great privilege to meet the man behind Frank.