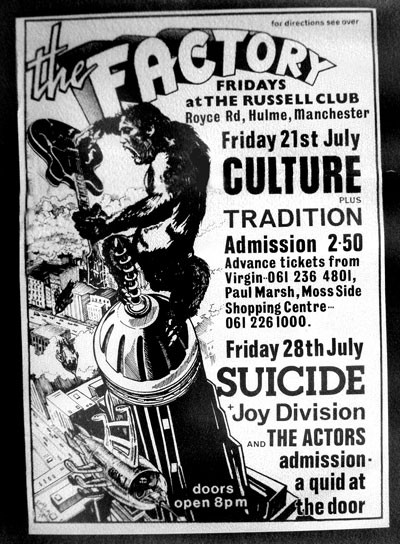 A smallish poster for a gig at The Factory in Hulme. Culture headlined one night, the next week being New York electro-punks Suicide supported by Joy Division. Also The Actors, but I don't know who they were... anyone?

There are flyers of this too, with a map on the back showing how to get to the Russell Club, although this one is blank on the back.
Artefact added : 5th June 2007
by mat

Wayne Says –
Was this before or after Suicide supported the Clash at the Apollo Mat? I may have been at this too but used to get very drunk and spent so much time at the Russell club sometimes weeks became a blur. I do remember the flyer though!

Hurqalyavi700 Says –
I remember well going to the Factory to see the above billed on Friday 28th -I was 15 at the time and I went along with a friend, a punk girl called Debbie, well known on the Manchester scene at the time. This was just after the 'Clash on Parole' gig at the Apollo (the 1st gig ever went to), Suicide were incendiary! A quid at the door for Joy Division and Suicide...amazing.

Lee McFadden Says –
The Actors featured Richard and Fred Fairbrass - who of course were later known as Right Said Fred.

David Evans Says –
i was there too, lived not far away in Gretney Walk and had heard suicide on PEEL, had heard about Suicide being bottled off the stage at the Clash gigs. i liked that electro sound so went along, on me own, and there cant of been more then 20 or 30 in the audience.. first time i saw Joy Division, blown away, and the start of a love affair. suicide were brilliant too. so saddened by the loss of ALAN VEGA r.i.p.
If you'd like to leave a comment, please Login. Login
Manchester Digital Music Archive is licensed under an
Attribution-NonCommercial-ShareAlike 4.0 International License.
Charity no. 1164179
Our archive currently contains 3616 Bands, 704 DJs, 1321 Venues, 219 Industry Professionals and 19583 artefacts contributed by 3537 members.