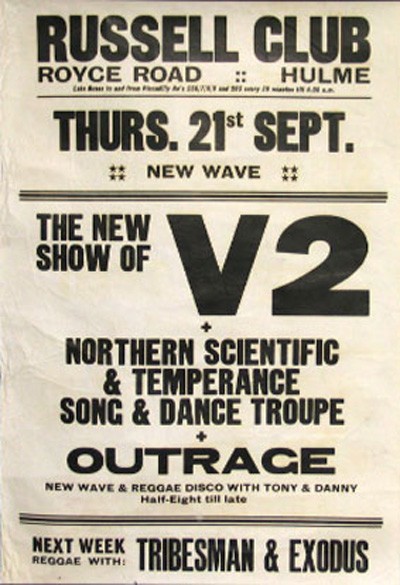 A poster for V2's new show! Who were Tony and Danny the DJ's, does anyone know? The Russell Club was also known as The Factory, where Factory Records put on many gigs. It later became the PSV...

DannyBoy22 Says –
Hi Mat
Im Danny O'Sullivan the guy mentioned on the poster.Tony was Blackabullet a fantastic dj ....Im at worriedarthur2@hotmail.co.uk if you wanna know more
If you'd like to leave a comment, please Login. Login
Manchester Digital Music Archive is licensed under an
Attribution-NonCommercial-ShareAlike 4.0 International License.
Charity no. 1164179
Our archive currently contains 3616 Bands, 704 DJs, 1321 Venues, 219 Industry Professionals and 19589 artefacts contributed by 3537 members.