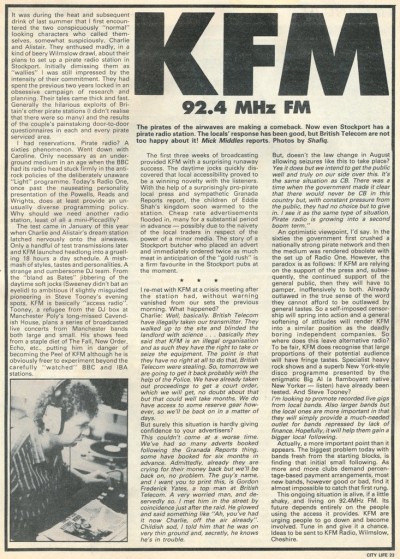 From City Life, March ’84; article on KFM radio straight outta Stockport.I recall it being a pirate type of affair ( or maybe just trial broadcasts...?), with the likes of Ian Chambers, late of V2, d.j.ing under the name of Jah Giro, (playing mostly reggae as you may summise), and looks like Steve Toon, late of The Cavendish, was running the whole shebang. I remember it being a good and wholesome thing but how long it aired for escapes me now....
Other stuff in this issue:-article about the council’s 3rd attempt to close traffic access to Denmark Rd next to The Kestrel (Harp) Brewery off Princess Rd, Moss Side; with much protestation from the local community , as the point of this was so the brewery could expand across the road to where Arnesby Walk was presently standing. (Jeez I remember very clearly that going up and not 10 year later they were pulling it down! it’s probably still being paid for !?).Anyway as the quote from tenant Gloria Gaffney states:- “”the council have briefed a barrister to fight residents and pedestrians when they should be fighting for them-and it’s us that are paying for it!” Well put, and as history shows it went ahead anyway. I would think also that The Moss Side riots sometime earlier could have played a part in the decision as the police station was attacked and they ended up putting all these concrete bollards outside it. Wished they’d put some money towards de-odourising the brewery though. When the wind blew in the wrong direction it used to stink; surprised it never put me off drinking for life!
Withington’s Conservative M.P.Fred Sylvester’s proposed bill in parliament on Feb 14th to privatise Ringway Airport. Obviously he only had the interests of the Greater Manchester Public when he proposed such a bill (and no doubt would have advised his stockbroker to purchase the odd share or two come the time, perhaps in his little biddy nephew’s name or however these things work).Fortunately the proposal failed, just!
Grass Roots Bookshop in a spot of bother after a police raid seized a quantity of books and pamphlets on drugs in July ’82, and the case only now coming to court. The charge was against company secretary Michael Don under section 3 of the Obscene Publications Act. No doubt everybody’s favourite God botherer Chief Constable James Anderton had an unseen hand in it all.
Big interview with Morrisey/ Marr/ Gorky Park & Zelig at the flicks;Coalminer’s Daughter at The Aaben.
A play called “Working Class Hero” by Bob Mason, about The Peterloo Massacre, on at The Library Theatre:- “almost at the very spot where the action took place....”.
Lots of other stuff......
Artefact added : 23rd March 2011
by dubwise-er