Heads In The Outhouse
Flyer
The Rudyard
1981 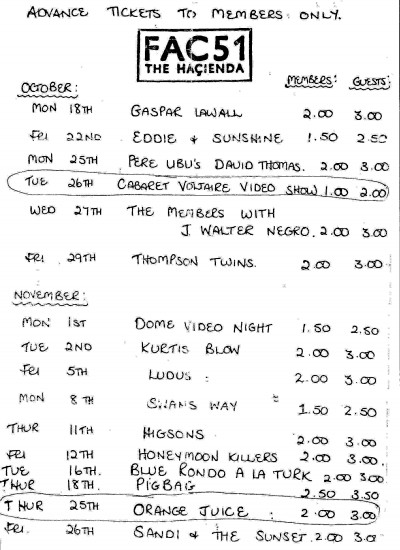 Heads in the Outhouse were formed in about 1978, by Laurence Sweeney and Michael Curley from Stockport.
1980 they were joined by Phil Curley also Stockport, Stephen Ryan from Wythenshaw and Iva from Whitefield. Gigs around Manchester and Stockport at venues including The Gallery, Giatinnos, Rudyard and others. Musically, a mixture of Echo, Cabaret Voltaire, Velvets, Kraftwerk and the like. Briefly managed by an ex-Corrie actor and shared the stage with Karen D'Ashe, Illumination, Ground Zero and loads of others. Packed up in 1983, when most of our gear was stolen from our cavernous practice room in an old Radcliffe mill. Recorded studio tracks include Sentence Passed, Figure it Out and Discontent. The various members now reside in Dorset, North Tyneside, Stockport and Tokyo....apart from Iva - whereabouts unknown.
Artefact added : 1st April 2011
by sweenlr

orangepeel Says –
I was at just about all these gigs as I lived on Langford Rd at the side of the Rudyard Hotel. and that's where our band Nu Tricx practised we were so loud that The Rudyard gave us a gig I will try and find a flyer an post it.
If you'd like to leave a comment, please Login. Login
Manchester Digital Music Archive is licensed under an
Attribution-NonCommercial-ShareAlike 4.0 International License.
Charity no. 1164179
Our archive currently contains 3693 Bands, 736 DJs, 1346 Venues, 241 Industry Professionals and 23288 artefacts contributed by 3709 members.