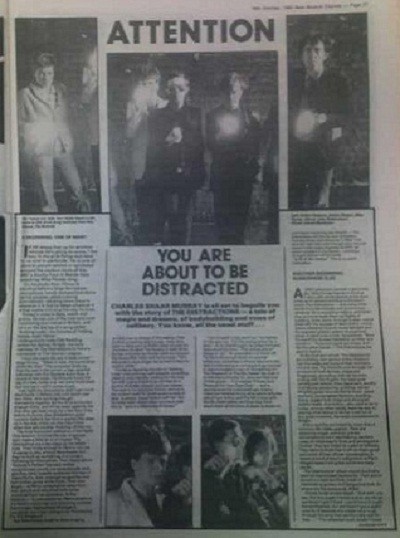 ATTENTION
YOU ARE ABOUT TO BE DISTRACTED

CHARLES SHAAR MURRAY is all set to beguile you with the story of THE DISTRACTIONS - a tale of magic and dreams, of bodybuilding and vows of celibacy. You know, all the usual stuff...

A BEGINNING: ONE OF MANY

"IF HE keeps that up for another minute he's going to come," the boy in the pink flying-suit says to no-one in particular. He is one of several people seated or sprawled around the control room of the BBC's Studio Four in Maida Vale watching Mike Finney sing.

On the studio floor, Finney is standing before a large Sennheiser microphone, hands clamped just above his hip pockets, pelvis moving convulsively, reaching down deep to wherever it is that he keeps whatever it is that mkes him sing the way he does.

Finney's voice is deep, warm and grainy. He has one of the best and most convincing soul voices in Britain, and he's on the last lap of a song called 'Nothing Lasts', six minutes of Talking Heads-meet-Velvet Underground-meet-Otis Redding written by Adrian wright, the only member of The Distractions to have a namesake in The Human League.

"I love this place the way it looks unreal," sings Finney. "When it rains, the pavements shine like steel." The composer looks up from his seat in the corner: a lean, gnarled individual with Doc Martens and a crop. A couple of feet away, Pip Nicholls hooks the cap of a beer bottle over her lower front teeth and worries it until it comes loose.

Last night The Distractions didn't get out of Manchester's Rafters club until damn near four-thirty: this morning they got themselves together for the drive to London at seven-thirty, and it'll be dawn again by the time they back home for a few hour's kip before drummer Alex Sidebottom goes round to Salford Van Hire to explain the deep rip in the side of the van that they'll find when they get out after finishing off the mix.

The time-honoured institution of the Radio One session: it comes the way of groups who make a little bit of an impact. The Distractions are a few steps up the ladder now. They're big enough to have run out of places to play around Manchester and they've built up something of a London following for themselves. Their Island album 'Nobody's Perfect' has sold neither exceptionally poorly nor exceptionally well, and they have recently sustained the loss of Steve Perrin, their principal songwriter and half of their guitar strike-force. Their new single - a Perrin composition taken from their album and retouched with some overdubs from his successor, Arthur Kadmon - is unexceptional. Many people in the band's entourage and following consider that a major Distractions hit single is inevitable, but it isn't going to be 'Something For The Weekend'.

But Mike Finney is still in there singing and the man in charge of the session, Dale Griffins is smiling approvingly. Dale, who used to be known as Buffin when he was the drummer for Mott The Hoople in both its Ian Hunter and post-Ian Hunter editions, loosens the tie another notch and announces, "He's the most in-tune singer we've had in here for quite a while."

Finney is repeating the title of 'Nothing Lasts' over and over with steadily increasing passion and intensity, waiting for the end, but with just a couple to go he tries for a soulful Al Green screech and just misses. The tape is run back and Finney returns to the control room for briefing and a swig of beer. A plump, yeasty fellow with fair hair, he looks taken aback when someone asks him to "give it a little more Al Green."

"You're askin' a lot, aren't ya," he replies, on the way out. "I'm the wrong colour for a start." As an afterthought, he pokes his head back round the door. "The wrong size an' shape an' all." He goes back in to finish off. Pip Nicholls clamps down on another bottle-top, wrenches it off and returns to the task of addressing an envelope large enough to accommodate a copy of 'Something For The Weekend' to The Mo-dettes' fan club. It is intended primarily for Jane and Ramona of that group - it is marked 'Private And Personal For Your Eyes Only' - and is accompanied by a painstakingly drawn, inked and lettered comic strip which tells the tale of how Arthur and Pip fell in love with the Mo-Dette belles and how they think about them all the time. A plane is shown in one frame traversing the Atlantic - The Distractions did the by-now obligatory five-day three-club stopover in New York and did right nice even though their records haven't even been released in the States - trailing a thought balloon which reads "M-M-M-Mo-Dettes". This is no mere infatuation.
Artefact added : 7th April 2011
by granata