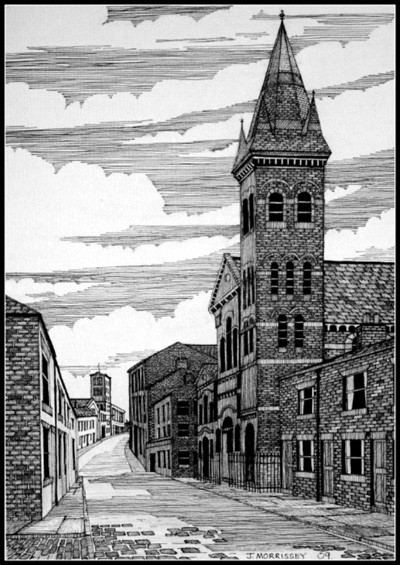 A wonderful drawing of The Tower Club sent in by John Morrissey who used to frequent the venue in the 70s and 80s.

The club itself was a former Victorian church turned into a rock venue in the mid seventies, the address was Bower Street, off Shaw Rd, Oldham.The music was mainly rock/punk - I know The Fall recorded a live set there in 1978 that is still available on CD... I believe Iron Maiden played early gigs there also Rich Kids, Buzzcocks, stuff like that. I can't remember how long the club lasted but there was a fire and after standing empty for some years, the building was sadly demolished, sometime in the early nineties I think.

Drawing taken from a photo.
Artefact added : 5th May 2011
by Abigail

mick_pye Says –
Think it was 1986 the club closed down/burnt down..

Was sad to hear that it had closed at the time. Saw some great gigs there. The night bus back to Manchester used to be a laugh crammed full of punks.
If you'd like to leave a comment, please Login. Login
Manchester Digital Music Archive is licensed under an
Attribution-NonCommercial-ShareAlike 4.0 International License.
Charity no. 1164179
Our archive currently contains 3693 Bands, 736 DJs, 1346 Venues, 241 Industry Professionals and 23288 artefacts contributed by 3709 members.