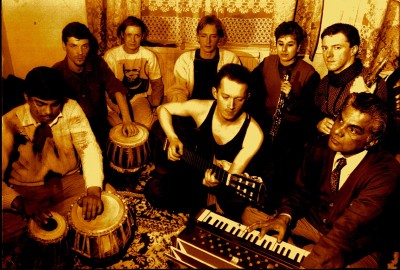 Pandit Manik Rao Popatkar gave Indian Music lessons
at the Adult Education center at Manchester Poly
during the early 80s. Whilst whiling away my Dole time
I attended Indian Music and Computer Music (pre Atari etc this was done on a clunky system known as an Alpha Centuri Music Computer),.Mr Popatkar had worked on some HMV recordings back in India as a Tabla player , I ve managed to find a couple one being with South Induian Violinist Prof VG Jog. At this time he resided in Rusholme where he established his teaching and concert organising .Visiting Indian Musicians often played private concerts in houses around the region including VG Jog .
His son Sandeep is a renown Tabla player in the Manchester area.
Artefact added : 10th June 2011
by graham