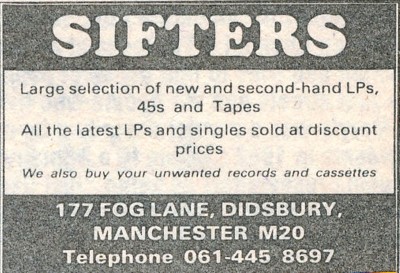 Think this record shop might be the one that was near The Cavalcade though I don't remember it by that name.Got a feeling there might still be a record shop still there....? Pretty sure there was, a couple of years or so ago,last time I was down round that way.....

"Mr Sifter sold me songs when I was just sixteen..."

dubwise-er Says –
Cheers for the heads up '63, looks like I went round the world with that one..... have to check it out.
Well I checked it out and found a youtube clip about birds in Fog Lane Park which says, is actually used in the Shakermaker video. I think the shop I was thinking of is / was down the Didsbury end of Barlow Moor Rd. My bearings ain't what they used to be.
Other stuff I've found by mostly messing about on youtube, which I've recently started to do, devil/ idle hands an' all....:- I was looking under "Mostonians" for an upload about City's journey to the F.A. Cup (still not found it), but under "Mostonians youtube" there's a clip of a steel band during a street carnival in '09 doing a rendition of "Transmission"; works for me! It's probably on the site but just in case...
Also a '90's jungle track by Cheshire Cat called "Bite the Dust" featuring parts of Moss Side /Trafford and a good ditty to boot.

dj Says –
I think the shop at the Didsbury end was Zero. If you wanted a blast from the past the only place to go was Discovery records in Gorton!

dale Says –
Sorry, not really close to the cavalcade, prob 20 mins walk away. The Tunes always seemed to be playing at the Cavalcade, think every Thursday night :)
If you'd like to leave a comment, please Login. Login
Manchester Digital Music Archive is licensed under an
Attribution-NonCommercial-ShareAlike 4.0 International License.
Charity no. 1164179
Our archive currently contains 3860 Bands, 758 DJs, 1458 Venues, 316 Industry Professionals and 29647 artefacts contributed by 4037 members.