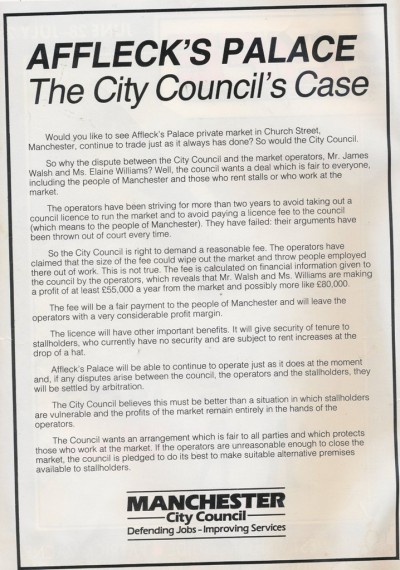 From City Life 35, June ’85.The honeymoon's over.... Trouble at mill for those young entrepreneurials at Afflecks.The old death and taxes.....Obviously got sorted out eventually, with a description later on, calling it “ the North West’s Carnaby St.”
Other Stuff in this issue:- Well the main theme by far is the dire state of The National Health, “the envy of the world!”Pages and pages of it. The magazine at this time was well political, but I suppose it needed to be considering the strife the country was in. It wasn’t all Haircut 100s and favourite shirts.
Manchester having a 2 week twin town exchange with Puerto Cabezas in Nicaragua, with a visit from native Miskito Indian leader Mary Bushey, who was involved in the overthrow of the brutal U.S. backed Somoza regime, and culminating with a mass rally at the Town Hall on July 19th.
A letter sent in by a young lad from Chadderton, complaining how come, during “British Film Year”, he was thrown out and told to” f*#k off” by the manager of The Hollinwood Roxy for wearing a baseball cap, and in previous weeks said manager had “insulted his friend Simon over his teeth, and his friend Kevin was insulted over his hair; that’s only the tip of the iceberg!”. I do hope they “built a bridge, got over it” and managed to reconcile their differences.
“Mask” and “View to a Kill” at the flicks
Artefact added : 15th June 2011
by dubwise-er