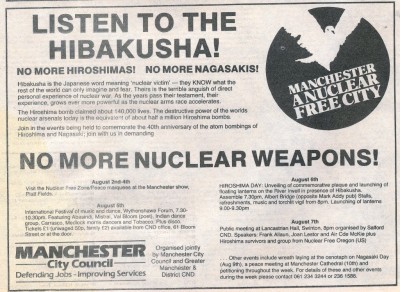 From City Life 35, July ’85.Manchester to the fore of the Anti Nuclear Movement at it’s zenith during the Greenham Common Women/ Bruce Kent times.
Other social/ peripheral stuff in this issue:-Big trouble in little China; in “The Citizen” column, accusations of corruption and gang land murder in Chinatown under the “unrepresentive Community leader”, Loret Lee, who has also managed to “wangle” a telex machine to expand economic links with China. Also the use of Vietnamese migrants “who Chinese crime bosses often use to do their dirty work”. I dunno; often enjoyed popping into China town for the odd meal; was blissfully unaware of such carryings on.
Interview with Bernadette McAliskey (nee Devlin), visiting Manchester for a Labour Party Conference. Sudden recollection of an I.R.A. trial at the courts down near Aytoun St. with police and marksmen on the roof top, circa ’84.
A long missive in the “Letters” pages from D.J. Laughing Gravy why certain reviewers in City Life keep slagging him off for his appearance and questioning his D.J.ing ability after Hacienda gigs. It’s acrimonious, possibly justified and signed “Yours angrily” so there!
That’s 3 City Life issues up in one go so that’s good, phew!At the tail end of them now.
Checked out Kinky Friedman with Van Dyke Parks on the weekend and jolly good show it was too. I only know Kinky from his books but he sure is one hell of a raconteur and singer. Very funny guy. Next night checked out Crass, (more accurately Steve Ignorant doing Crass stuff). Wasn’t sure about it as I thought it might be a bit too far down memory lane and a pastiche of former glory, but decided to check it out as it was me birthday night....happy birthday Dubby.!....Cheers mate... Well it was really good! I’d forgotten how much of that stuff had seeped through into my subconscious/ psyche and how much of it I recognised, having not listened to it in the intervening decades. It still had much energy, and for many who were there who were too young to remember back that far (including most of the band), the immediacy and purpose of the music was a sharp reminder how directionless and lacklustre most “rock ‘n roll” bands are. It didn’t feel like a show, it was quite powerful and had me all fired up like a young ‘un even though the only thing I know about anarchist is it’s never gonna rhyme with antichrist. As D.J. Lance Rock would say “Aaaaawsome!”
Right I’ll let you get back to your tea.
Artefact added : 15th June 2011
by dubwise-er