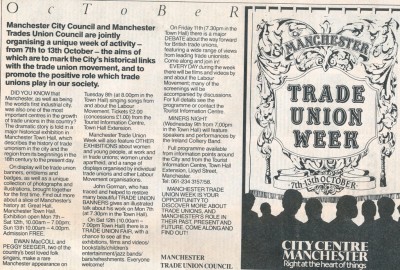 From City Life 39, Oct. ’84. In the same month Manchester hosts an Anti- Apartheid week it also holds a Trade Union Week celebrating the role of Trade Unions which it says, were founded at The Mechanic’s Institute, 103 Princess St, where the T.U.C. first met in 1868. Manchester; so much to answer for....Those old troopers, Ewan McColl, composer of "Dirty Old Town" about his young days in Salford,"The Manchester Rambler", "First Time Ever I Saw Your Face"" among many others,;and Peggy Seeger, at The Town Hall on the 8th October.I've added Ewan McColl to the archive as he was from Manchester (....well Salford...) and proudly so; and a man of influence and significance in the history of 20th century music.
At the flicks:- "Desperately Seeking Susan" on general release; "Diva" at The Cornerhouse.
Artefact added : 2nd July 2011
by dubwise-er