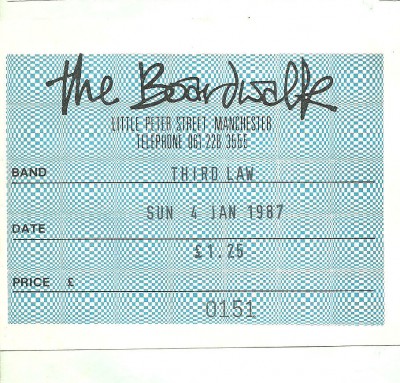 I went to this gig with some mates who had seen Third Law at some of their previous gigs around Manchester. It was a real eye opener for me, and it turned out to be a top gig.The songs were really well crafted with meaningful, serious lyrics,on top of a swirling powerful sound. No showboating or 'look at me' ego`s on display, they delivered their songs with passion and sincerity. Each song was different to the last but maintained the same soul,mood and vibe, throughout the 45 minutes of their set. They were totally different to the other bands who were making waves at that time, which is why we liked them.
I always wondered what happened to them though, because after playing some other gigs they just dropped off the radar? I know they used to record and rehearse at Spirit studios in Manchester,so if anyone else knows anything about them I`d be curious to hear!
Artefact added : 2nd July 2011
by Mosaic