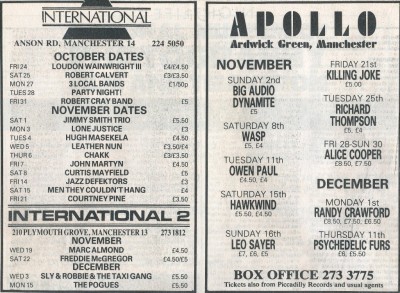 From City Life 65,Oct ’86.Looks like quite rich pickings for that particular fortnight.Still whack on Jimmy Smith’s Bluenote classic “The Sermon” on the odd lazy Sunday afternoon, it’s made for it; but alas never did get to see the king of the Hammond.Jimmy McGriff was another noteable Hammond organ player, a sound I kinda “dug” just around that time. There was the Farfisa organ too,which was favoured by many but, as I could barely play chopsticks I wouldn’t know what the deal was with that;a case of not knowing my carrots from my (green) onions (!?).
Actually there used to be a shop in the upstairs of the Arndale where a guy used to sit by the doorway playing one of those Bontempi type organs with the built in cha chas and mambo rhythms, trying to flog the merch to the passing weekend masses. A bossa nova rendition of "Don't Cry For Me Marge 'n Tina" isn't easy to forget no matter how hard you try. I’m sure many would have fallen under its spell though as it would have made the most rudimentary player sound quite accomplished and capable of playing any given ice rink across the land at short notice.A few years on and you could buy a portable Casio keyboard that could do all that and more and give Yazoo and their “Situation” a run for their money....
The Sly and Robbie gig was a doozy. I'd missed the opportunity to see the Rhythm Killers several years earlier when they toured with Black Uhuru, but the gig was cancelled as part of the fallout of the Moss Side (and pretty much every major inner city's riots) of the summer of '81.Saw them on other occasions but never heard them play "Plastic Smile" with its killer dub, till this day.By this time they'd done the classic and ground breaking "Nightclubbing", Ian Dury's "Spasticus Autisticus" (bit of a lost classic that with a damn funky bassline), and Dylan's vivid tale"Jokerman" with M. Knoppfler doing his twang thang. Actually I do remember that particular ditty being on a "video jukebox" which I think might have been at the Royal Oak in Didsbury (?). That was a brand new invention at the time and I can't remember it round any pub after that. Maybe it never really caught on, a case of a great idea on paper but not so much in reality.
Meanwhile, back at the International....I think Half Pint was the first artist off the Taxi rank and came bouncing on to a full house, singing that all-time 80’s dancehall classic “Greetings”, followed by a young and lean Ina Kimoze.I used to have 3 versions of that “World a Reggae” choon,(which became such a heavily sampled track a few years back, noteably on Damian Marley’s staunch “Welcome to Jamrock”), and now I don’t have any. I’ve heard mention of Discogs so maybe one time I’ll go knocking on their door. The Whitehorse in Hulme had his single “Trouble You a Trouble Me”, which they eventually let me have, as well as things like Eek a Mouse, Barrington Levy intermingled amongst all the chart fare and country/ Irish music that such pubs had; great Jukebox that....King Yellowman was the headline act and a walking, talking superstar at the time.His Greensleeves !2" discomix offering of "Zungguzungguyuzungguzeng" on the "diseases" riddim ,was worth having just to see the song title printed right across the record.He wasn’t any better looking in real life neither, bless ‘im.
Several years on Misters Dunbar and Shakespeare did the innovative and quirky "Boops" on T.O.T.P.s and it worked a treat. It sounded so "modern" and as they never seem to remain stationary I presume they're still "pushing the envelope"...(ouch!).
Artefact added : 7th July 2011
by dubwise-er