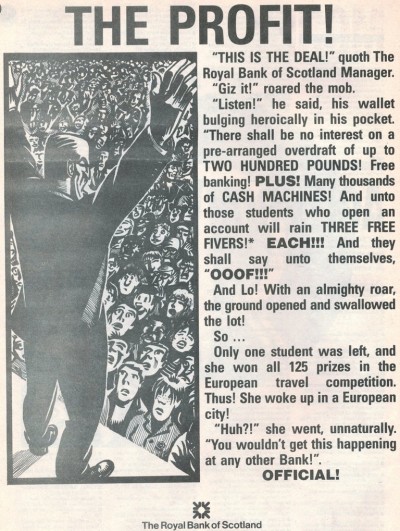 From City Life student special, Oct. ’88.
The kind of ingratiating , pseudo-biblical stylee nonsense those rogues and their accomplices, practised in the dark arts of advertising, were expounding, back in the latter days of the heady ‘80’s before it all went tits up (again!).
Other stuff in this bumper issue:- mention in the “Pubs” section of the Marble Arch on Rochdale Rd and it’s great jukebox for which I can vouch safe; The Spinners in Hulme “where little drinking takes place but where a deep sense of inner calm and considerable human understanding prevails.”; funny because it’s true.....
In the folk section mention of Radio Manchester’s “Folk Like Us” with a revolving door of local artists, the likes of Stanley Accrington,Gone to Earth, Henry Normal, Kevin Seisey and so on.
Mention of Mark Smith’s Cog Sinister label of which I know nowt about.
In the “Cinema” section ,mention of the somehow indistructable Aaben Cinema, despite the Cornerhouse having cornered the market of the arthouse and indie film world. It’s described as “a dynamic and welcome change...and has a seedy charm and intimacy often lost under the plastic kitsch of the main stream multiplexes”; here!here!Plus it's concessions "for students, U B 40s and Hulme Residents on production of a rent book....nice.
Showing that particular week:- “Tompopo”, “Withnail and I”, “Repo Man”....
“Good Morning Vietnam” & “Who Framed Roger Rabbit “ on general release.
Artefact added : 9th July 2011
by dubwise-er