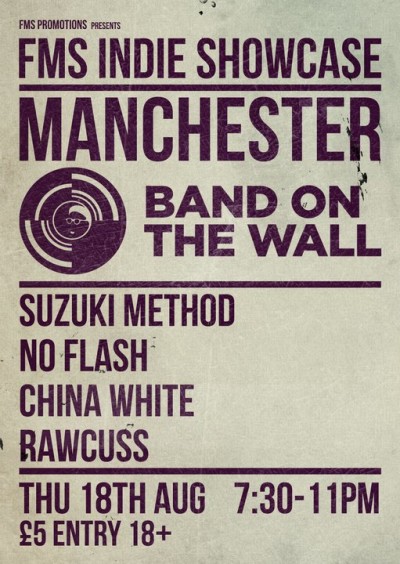 In 1979 Manchester was a dark but surprisngly vibrant place for new music- the band on the wall mixed high brow, Jazz and Blues with old and new wave music and nights from the manchester collective - again now on 18th August - four new bands from manchester revive that indipendent traddition of DIY shows at the revamped and reborn BOTW- Your all invited see you there

Featuring four of the brightest new bands from Salford, Manchester, and beyond live at the world famous band on the wall. “An eclectic mix of independent music”. This night of live music, inspired and shaped by the DIY sprit and ethos of Wilson and McLaren, sees Independent bands work together in the spirit of co-operation to present a night of cutting edge new music at a venue that has previously hosted seminal performances from the likes of; Joy Division, The Buzzcocks, The Fall and John Cooper Clarke.

“Music feeds dreams and keeps us alive, we live, exist and die to the sounds of music, it makes you happy, makes you sad, lifts you up, and throws you down.”
Artefact added : 16th July 2011
by boy in exile