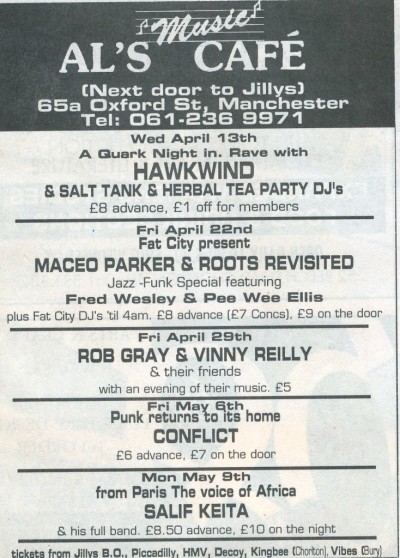 City Life 251, April ’94.
Okaaaaay.... Four years away from Blighty, a 100 + issues on, and back in the ‘hood. Lots of changes around the city since 1990. It’s post the Olympics bid and certainly the skyline’s been changing. The Dry Bar/ Night and Day/ P.J. Bells (which previously had been a spit 'n sawdust Yates's after the one just off Piccadilly closed down), and others I don’t recall ,were all going concerns and it felt good to be back, catch up and be proudly shown around town. Hulme was pretty much demolished and the sleepy village of Chorlton had moved on apace. Lots of changes all round plus nieces and nephews towering over me, new additions to the clan and general life goings on; a positive vibe all round.
Eric Cantona on the cover of this one, comparing the ball responding to his foot “just like a woman with the man she loves”. Oh those Frenchies....
Al’s Music Cafe = The Music Box? That’s a pretty good and varied line-up.
Artefact added : 19th July 2011
by dubwise-er