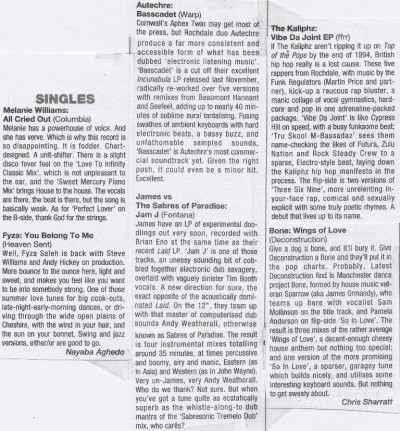 City Life 251, April '94.
Mostly unknown to me, but Autechre certainly popped up in the racks over here, maybe 'cos of the Warp label.Went to check Andy Weatherall not so long back,bit partial n' that.Still give that track "Brootle" a bit of welly now and again.On the night though he just did some sort of techno-ey type stuff and was expecting something a lot more diverse.I'm sure on home turf he'd go the whole wide world.
Nice bit of cutting and pasting is that, even though I do say so meself...
Well, off to watch the late news and see what that other old gentlemen with print in his veins has been up to today along with his minions , in front of the parliamentary committee. As the old saying goes "..it's nice to see the bastards squirm...".
Artefact added : 19th July 2011
by dubwise-er