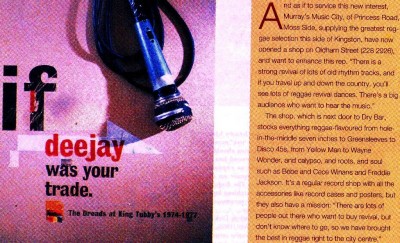 City Life 251, April ’94.
Review of the “Blood and Fire” label straight outta Ducie St; and what a great contribution to the world of reggae, and music in general, that label’s been. Got quite a few meself, and along with the Soul Jazz label, (who cover the waterfront of all musicalities and got a great new release out, “Invasion of the Mysteron Killer Sounds”), have dug deep to bring mostly previously unheard and lost classics, all done in the best possible taste. What a great job to have, to rediscover this wealth of untapped music and bring it to a new audience; has to be a labour of love.
Article next to it regarding Murray’s opening a new shop on Oldham St. which I don’t recall, but did spend so many Saturdays in the old man’s shop, from it’s Brooks Bar days till it took its pride of place on Princess Rd. Pretty much the only shop to survive unscathed during the Moss Side Riots. He was a man of few words, would just throw the platters on the counter in front of you that he thought you might be interested in, then some time later, between dealing with other customers, come back and put the needle on the record of the chosen few, to which you would kinda nod in the opening minute , yay or nay; top sound system in there too; would do Shaka proud. One time me mate gave him a Murray mint along with the oft quipped line “you should never hurry a Murray..” to which he just kinda gave a little laugh and headed down the other end of the counter; guess you had to be there....
Probably mentioned before but got fond memories of that shop; and over time he got to know us and eventually just let us spend hours in the back room, with one deck and countless amounts of records, of which I bought rather a lot and of which I sold rather too many when I moved away. Still got a fair few though and I still get to play some of them out from time to time. Records ain’t no good unless they’re vibrating through the ether in all their snap, crackle and pop glory, and not locked up like some vintage collector’s piece as I’ve know some people to do.
Other stuff in this issue:-two page article on the newly blossoming Chorlton cum Hardy.
Feature on British Rock Movies with “Backbeat” being the latest. Mentions of Slade’s “Flame” and another “Never Too Young To Rock “ from 1975 featuring Mud, Slik, Rubettes etc. and a sterling example of how and why not to make a film; sounds ideal for some lazy Sunday afternoon. Sudden recollection of a Norman Wisdom film set in the early ‘70’s when the likes of Peter Sellers and Richard Harris were featuring in B grade, indulgent, psychedelic hippy type films and there’s Uncle Norm flowered up dancing to The Pretty Things playing in the background. I can remember my brother seeing them, maybe at the University and I think it was a given that Twink, the drummer, always stripped off.
A regular “Manchester Cajun Club” night being held at the Chorlton Irish Club.
Lots of adds for Futons, which seem to be the new “to die for ‘’ accessory. They weren’t very good were they......?
Ken Dodd at Bolton’s Albert Halls. “We are the Diddymen” used to be on high rotation in our Decca mono-player when I was a young 'un.Flippin’ eck, another flashback, when we got one of those new fangled “Stereograms” that looked like a piece of furniture; red letter day that. Oh, and getting a coloured telly, which I’m sure anyone of an age would remember. Jess Yates' "Stars on Sunday" the first thing I can recall; should have put me off for life!
At the flicks:- Philadelphia, Cool Runnings, Schindler's List, The Piano...good one that...
Lots of other stuff.........
Artefact added : 20th July 2011
by dubwise-er