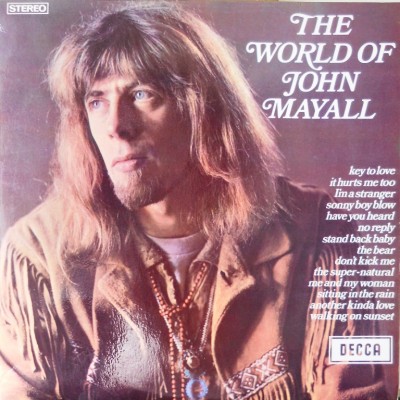 Talkin’ ‘bout Blues on the M/c scene, well the guru/ shamen would have to be “...wanderin’ John”. No doubt hugely influential on the British music scene along with Lonnie Donegan, Alexis korner etc.; of which there must be untold amounts of articles and books. The thing with these blokes is they were more catalysts than frontline entertainers in their own rights. Then there were the Ronnie Scott / George Melly Jazzy brigade which all fed in to the British invasion of the early ‘60s. (George Melly with the Stranglers many years later; who’d ‘o thowt?).
Anyway Mr. Mayall and his Bluesbreakers were definitely part of the sound track of my yoof whether I liked it or not and I suppose I did.....at least eventually. My eldest brother had a habit of, whenever he bought a new single, we all had to stop what we were doing, watching telly,playing outside or whatever, and sit in the living room and have to listen to what ever it was he’d just bought. My Mam told us we had to, maybe just to humour him. The one that really springs to mind is “Albatross” which, as with other records we’d have to sit through several times, in this case thinking about an albatross flying, whatever one of them was! Jimi’s take on “All along the Watchtower”, The Band’s “The Weight” and lots of others when, for the most part you'd rather be doing almost anything else. Well he’s your big brother so what you going to do....? As with many of his generation (10 years senior to me), he had that look not too dissimilar to this cover but with much longer hair.Gone was his cleancut look of the stripey blazer and the Steve Marriot hair of a few years earlier. Living on a barge in Amsterdam at the height of hippiedom will do that to ya.
"Sitting in the Rain" was prob me fave as a kid because it was catchy and upbeat and he really did have a very sweet voice. “The Bear” starts off with Canned Heat’s “On The Road Again”, with whom he did lots of recording and I still love that song. There’s a great version by Rockets, a French band along the lines of Kraftwerk, where they’re all dressed as silver spacemen; slightly bizarre but works a treat for me!
Aaaanyway Mr. Mayall, from Manchester, in another time....in another place.....
Artefact added : 5th August 2011
by dubwise-er