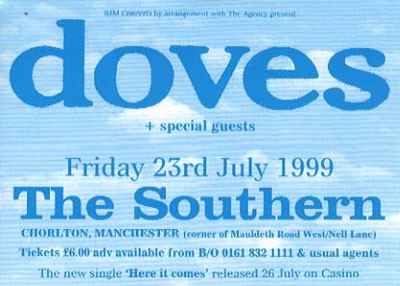 A small pub near Southern Cemetry on the outskirts of Chorlton was host to a fantastically messy Doves gig. The venue is more famous for hosting Agraman's comedy club, The Buzz Club, where comedians such as Johnny Vegas and Steve Coogan would make surprise appearances to test new material (circa 1992-95). I once saw Arj Barker there (now in Flight of the Conchords) and ended taking him to the Boardwalk so he could 'look at girls'.

This gig was incredibly hot, I had problems with my video projectors that were over-heating and kept swithching off.

"We really liked the idea of playing venues in Manchester that weren't known for putting bands on. The Southern is a big old pub in Chorlton well known for its' comedy club. This gig was important for us. We wanted to play well. I could't get hold of a bass that worked until a few minutes before the gig. The whole night was a catastrophe. The sequencer went down, the projectors over heated and the sampler broke."
Artefact added : 5th June 2007
by mat