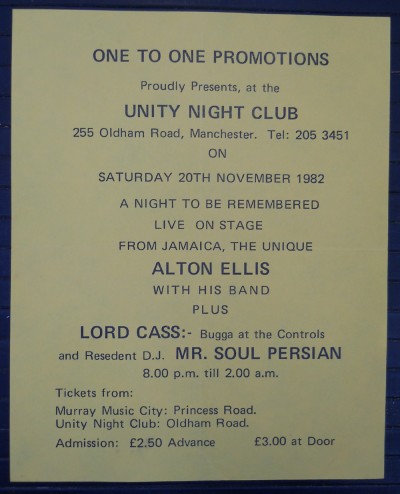 Mr. Soul Persian (born Kingston, 1943) came over to Manchester at the age of eighteen. He started out playing blues and shebeens, then scored his own little shebeen in the cellar of Denmark Cafe on Denmark Street.

"First of all it was a little bit of a social thing, it was like a shebeen but just a small thing, it was just about me and my friends. And at night we use to go down there and play our music, sell a few beers to people passing by and use to have some really nice times down there because I loved jazz. In the early hours of the morning I use to sit there with my friends and we would play some Jimmy Smith, Wes Montgomery because it was more for us, our own entertainment and we use to just have fun.

And that was when one night Phil (owner of the Reno in Moss Side) sent this guy down to see me. He said Phil would like to see me at The Reno, because The Reno had been going for a few years then, but it just seems like they weren’t doing anything you know.

Nobody was interested in going in there. Like on a Friday and Saturday night, The Nile was empty as well, you know, very few people. So I went to see Phil and when he saw me he must have thought 'this guy can’t be any good', we talked and he didn’t bother, he got somebody else. He tried Kaz, he tried Leroy, he tried all the sounds and he still couldn’t get the club going, so in desperation he came back to me and he sent for me and I went again and he said 'OK, I would like you to be the DJ of the club', so I said 'OK'.

(Excerpt from interview with Yvonne McCalla for Commonword)