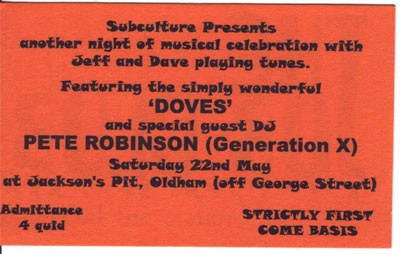 "This was a messy night. We played our first cover- Joy Divisions' 'Transmission'. The promoter told us the money he was making from this gig was going on booze and postitutes!! He had pissed his pants by the end of the night. Me and Andy got left behind because the van f****d off without us. We were stuck there for three bloody hours. "

There is a very quick clip of this gig on the Doves DVD 'Where we're Calling From'. Dj Pete Robinson was one of the Hacienda FM djs.
Artefact added : 5th June 2007
by mat

Abigail Says –
I went to this gig and had a really weird night. Windowlicker by Aphex Twin got played, which made up for it.

indeed69 Says –
Librium and alcohol. Don't do it. This gig was hell to put on and then i lost proper consciousness, sorry. Some people loved it, but others, myself included rank it as a nightmare. It was never going to be a celebration of music, once Rob Gretton passed away days before it.
If you'd like to leave a comment, please Login. Login
Manchester Digital Music Archive is licensed under an
Attribution-NonCommercial-ShareAlike 4.0 International License.
Charity no. 1164179
Our archive currently contains 3873 Bands, 759 DJs, 1464 Venues, 323 Industry Professionals and 29792 artefacts contributed by 4061 members.