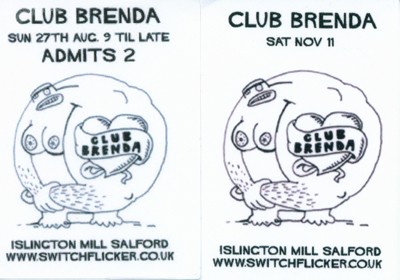 Bands/artists that have played Brenda include:

DJs that have played Brenda include:

The ticket on the left was for this November's Club Brenda, which conveniently fell on my birthday. Rather a lot of strange dancing took place, due in part, perhaps, to something I ate.

DJ Zoe McVeigh played The Divinyls' 'I Touch Myself' - cause for celebration in itself.

But who is the mysterious Brenda? According to the club's MySpace page, she is a six-inch Salfordian bodybuilder.