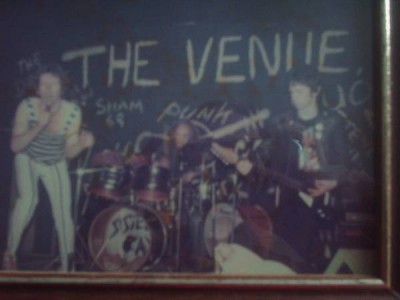 i was guitarist with SISTER RAY . i formed the band
in 1978 with singer clive robinson from sale. we were
both lou reed fans and sister ray was a song on the
VELVET UNDERGROUND L.P clive sadley passed away
about 10 yrs ago. also in the band were alan on bass and bill on drums.i remember the gig at BOWDEN VALE HALL because i had my distortion pedal nicked before we went on stage. we also played at college of building, hardman st, m/cr, clive cut and stabbed a pigs head on stage, he was very much into being outragous. we also played at RAFTERS, oxford rd, ELECTRIC CIRCUIS, and we supported many top acts at MAYFLOWER CLUB, gorton, also we played BAND ON THE WALL and we were on RADIO MANCHESTER and appeard on the L.P IDENTITY PARADE. i left the band in 1979, johny marr took my place. he was playing a cheap LES PAUL copy, a shaftsbury. i shown him the chords to the songs we were doing in our song set, he was about 16 or 17 at the time. i have played in various bands over the years mostly blues, i formed my own band in the 90s called THIRD DEGREE and gigged all over the northwest. i still play guitar and play a white FENDER STRAT upside down HENDRIX style. im also a keen cyclist and i like hillwalking in the peak district. i hope this has been of interest to people
Artefact added : 3rd December 2011
by alf_henshall