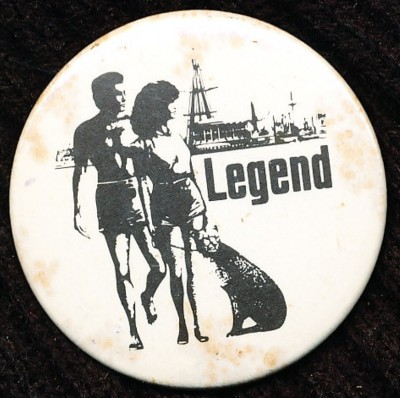 Bits 'n bobs & odds 'n sods. A few 1 " button badges, (and a couple the size of a saucer!), from yesteryear.
First cab off the rank in this, the year of the dragon; one from the rather smashing and state of the art "Legends" nightclub and danceteria. The kind of place where it was just about conceivable someone might actually vogue in with a cheetah on a leash and no-one would bat an eyelid.About the only people they wouldn't let in were those wearing a jacket and tie combo. Made quite a nice change for that time; guesstimating '81, about 3 p.m.
I was surprised to see on a recent sojourn back to M/c that the venue is still there, but right across the road the much frequented and most definitely un-state of the art "Cyprus Tavern" has mysteriously transformed into a kebab shop.
The other "Legends" was in Wigan, with similar nights, punters and d.j.s, but I never ventured that far meself.
Artefact added : 18th January 2012
by dubwise-er

BazG Says –
This was one of my favourite venues in the late 80's. I used to alternate between Legend and The Hacienda on a weekend. The DJ's played some great underground dance/rave music and the Sunday night all-nighters were legendary. Opening about 12, as I recall, the place used to attract some big queues. I used to like the fact it didn't take itself too seriously. Often had a mad half hour where they played Abba etc, then it was back to the serious stuff. Still remember hearing Back to Life for the first time on an all-nighter and the place went wild.
If you'd like to leave a comment, please Login. Login
Manchester Digital Music Archive is licensed under an
Attribution-NonCommercial-ShareAlike 4.0 International License.
Charity no. 1164179
Our archive currently contains 3796 Bands, 743 DJs, 1432 Venues, 294 Industry Professionals and 28235 artefacts contributed by 3896 members.