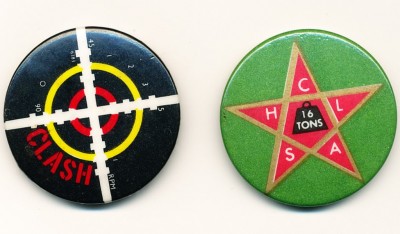 Badges from a couple of different Clash gigs at The Apollo. I think one's the "Moving Target Tour" (?) and the other's the "Sixteen Tons Tour".
Badges were prevalent back then and you could wear your badges like a true badge of honour. The "very mekal "brigade took it 10 steps further by emblazoning their denim type jackets with tapestry and needlepoint, to denote their partiality to whichever bouffanted and codpiece sporting combo that eased their tortured souls.Occasionally you would still see the ol' bar towel (Boddingtons been the most popular one),sown down the leg of a pair of jeans as some sort of mega-patch.But that was usually a remnant of a previous era and the ensuing smell of pachouli oil would be enough to keep you at bay.
Most people just opted for badges which could be easily purchased from many outlets, particularly stalls in the Underground Market.They came in all shapes and sizes and it wasn't uncommon for people to wear loads of them all over their jackets.
Artefact added : 18th January 2012
by dubwise-er 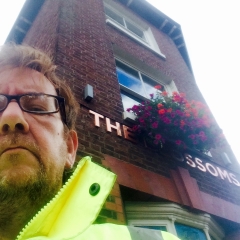 Ron Says –
Clash On Parole Tour on the left

dj Says –
The Clash played in town [Apollo] on the 16 tons tour on Feb 3 1980, playing new songs from London Calling. The day before this gig they had recorded Bankrobber with support act the legendary Mickey Dread. The intro music they used for the tour was a version of 16 tons by Tennesee Ernie Ford.
The On Parole gig also at the Apollo was on July 2 1978, supported by the Specials and Suicide. The gig was so good that Strummer wanted to organise a gig the following night at Rafters. He always said Manchester was "Clash town".
If you'd like to leave a comment, please Login. Login
Manchester Digital Music Archive is licensed under an
Attribution-NonCommercial-ShareAlike 4.0 International License.
Charity no. 1164179
Our archive currently contains 3796 Bands, 743 DJs, 1432 Venues, 294 Industry Professionals and 28239 artefacts contributed by 3896 members.