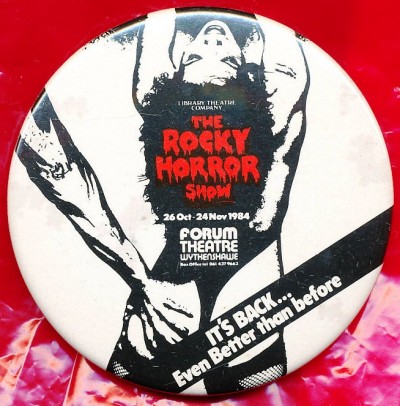 Badge from The Rocky Horror Show at The Forum ,1984.( I found a big box of badges just recently; flippin’ loads of ‘em! most not any use to this site though). Didn’t see this particular show, though I went one time to see the film at The Odeon or some such place to see what all the fuss was about. All the Pips type crowd were all dolled up, throwing rice, squirting water pistols, opening umbrellas...;would've played havoc with the upholstery etc…The artifact ain’t much in itself but does remind me of things and time round that way in the ‘70’s.
I think for most of us kiddywinks the thing about The Forum was that it had a pool and was within easy walking distance. Before that we used to have to get the bus to Sharston, which had an Olympic Size pool and a few diving boards .Great baths that was! Fondish memory of being kicked out for emptying a packet of snacks that looked like rainbow coloured rice crispies into the pool, and we thought it was ace watching them floating across the water like a giant bowl of your favorite cereal, till we got caught out and were taken up to the manager’s office for a bollocking. Never did throw processed cereal type foodstuff into any pool ever again; a lesson well learned .Aaaanyway The new built Forum, besides proudly claiming Wythenshawe was now a twin town with Leningrad (can’t imagine they were greatly different…) also had a library, sports hall and theatre. Not long after opening they put on a show for the youth. It was Spider Mike King; probably the first bona fide rock ‘n ‘roll band I ever did see. I was hooked,lined and sinkered to the live r ‘n r format from that time forth so cheers Mr. Spider.
Every year The Forum put on an event called the “Impact Festival” which was like a mini cultural festival for the goodly folk of Wythenshaweville. Can’t recall it was much cop but they used to put bands on in the big hall. One year, circa ’76, local lads ” S.F.W.”(“So, sweary word, What”), were headlining. I’d seen them play round the way at the likes of Bowden Hall(?) and headlining at the Moss Nook Scout Hut; yes they were that big! The same hall was also used by Fianna Phadraig Pipe Band, ably lead by Terry Dowling, after whom The Wythenshawe Centre was renamed in his honour. Saw quite a few well known Irish bands in that place while doing a spot of glass collecting, and I noticed recently it is now sadly defunct.
While waiting for the headline act and semi listening to local folkie type bands, I was having a chinwag with this rather odd looking individual standing next to me. He looked like he’d just strolled out of the gatefold of Blonde on Blonde with the added accessory of a handcuff on one wrist. Rather cringingly I recall saying something along the lines of you could be the next Bob Dylan, to which he replied “Yeah but I’d rather be the first me…”.Touche’! I'm sure he'd heard it ten times or more....Well I was 16 going on 30, and I have to admit I did have something of a Bobby crush (If you’re of a certain age, forgive the truly awful pun…).Well Mr J.C.C. jumped on stage after the folkie stuff and proceeded to be the first of himself. I had no idea who he was and of course he was brill. A couple of weeks later I was watching some late night Granada music programme recorded live in a pub in Kendal of all places. Anyway lo and behold there’s this bloke again reading poetry on telly! unheard of unless your name happened to be Pam Ayres. So it turns out he wasn’t just some local head the ball. The headliner of that particular programme was Country Joe, lamentably without his Fish. He sang “B.I.N.G.O.” and was total bobbins. With a teensy bit of hindsight a change was gonna come and not before time. Local heroes Slaughter were knocking around and T-shirts emblazoned with graphics like Little Bobby Storey or Chinese Rocks were starting to pop up. Even the likes of Sad Café were looking good. Like everybody at that time I saw the Salford Bard on many an occasion, usually alongside bands. The last time was at the opening of the new H.M.V. just over the way from where a girl worked the checkout desk of a certain Manchester megastore record shop.
So S.F.W. were basically a four to the floor, no nonsense, heavy rock band and were always bloomin’ loud! Which of course when you’re a young ‘un can never be loud enough. After a night of mostly wincey type balladeering it brought a soothing change. I know they played the pub rock circuit for quite a while after that and like many bands of that ilk splintered and morphed into something more contemporary, to ride behind the crest of what was commonly known as ”new wave”. The energy of such grass roots bands was a precursor to much of what became punk stylings. Wasn’t often you could have a good night out in W/shawe as they invariably ended in certain parties having the umph with certain other parties, but for me this was a memorable one.
.
Artefact added : 21st January 2012
by dubwise-er 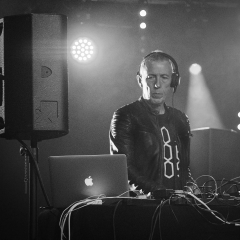 David Dunne Says –
The production on this badge was, I think, the second or third staging of Rocky Horror by the Library Theatre at the Forum. The first time was in 1983, around May. I was with the Library Theatre on a student placement and got to work on it. There was a huge fuss made about opening night as they had managed to persuade Richard O'Brien to come and attend the first night. He arrived wearing what I remember to be quite an outfit. Pretty sure he had gold glitter trousers on.
I was working on the merchandise stall that night and he came to get a programme, T shirt and a badge and quite naturally, walked away without paying for them. I still laugh to myself at the idea of Richard O'Brien walking around Wythenshawe.
If you'd like to leave a comment, please Login. Login
Manchester Digital Music Archive is licensed under an
Attribution-NonCommercial-ShareAlike 4.0 International License.
Charity no. 1164179
Our archive currently contains 3861 Bands, 758 DJs, 1458 Venues, 316 Industry Professionals and 29644 artefacts contributed by 4033 members.