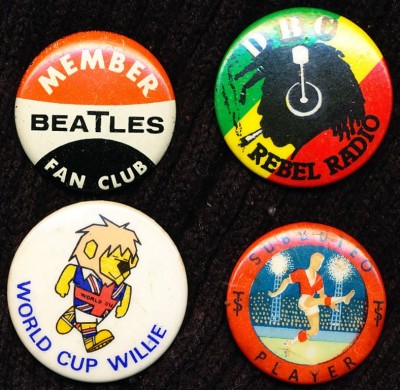 Now I’m just plain showing off! More badges from a bygone era, (couldn't find Rufty Tufty, the road safety squirrel one though, gutted!). Don’t know where The Beatles one came from but it was old when I got it. The “Dread Broadcasting Corporation” was a personal fave, probably from a Mikey Dread gig playing alongside the Clash. I read somewhere recently, maybe on this site, a bit of a story about some of The Stone Roses lads mooching around near The Old Garrett some time, and hearing music coming from a nearby building, followed the sound. Turns out it was The Clash and Mikey Dread recording Bankrobber & Rockers Galore, which initially, after hearing it on John Peel, could only be bought as a Dutch import E.P. with “Train In Vain” as the A side. Well from what I recall of the story those young lads were made very welcome by the band and their entourage and sat through the whole night’s session. That’s a nice, heartwarming story of how to carry yourself as a rock star when you’re under heavy manners. This 1” offering, alongside the likes of me Siouxsie, Black Sabbath and various other badges stuccoed all over my outer apparel probably gave me a passing resemblance to something like a Pearly King; a look I’d always aspired to; either that or a jockey. I probably would have looked like a right prat getting on the 106 on a Friday evening dressed like that though….probably. There was very little in the way of designer clobber back then so instead of paying for the privilege of having D.K.N.Y. scrawled across your made in a Saipan sweatshop T-shirt, you could always arrange brightly arrayed button badges across your own home made effort.
The “World Cup Willie” one reflects a bygone era when England actually lived up to expectations and beat the Huns on home turf in the summer of ’66.I think me dad nearly jumped out the window in raptures!As Freddy sometime later incanted, we really were the champions of the world. Of course 4 years later in Mexico it all went slightly pearshaped with the captain being charged with appropriating goods which did not belong to him. A conspiracy perhaps…? You be the judge .That was a great world cup theme song though and if it was ever up on a karaoke machine I would surely sing it everywhere I went.
The final badge those of a more mature demograph will recall, refers to “Subbuteo”, the other sport of kings. Besides “Breakout” and “killer” it was about the only sport I was ever good at. I wanted to be like Willie Donachie but I just cud’nee hack it. My subbuteo pitch from Santa was wallpaper -pasted to a big sheet of hardboard and was smoother than a bowling green. With a fair amount of dedication and practice I was bending ‘em like Beckham waaay before that prima donna ever kicked a casey .From time to time I can still replay ( in slow motion…)the moment when I bent it over the defence from a direct free kick to clinch the derby and hearing the roar of the crowd; or was it my brother calling me a “cheeser”…..?It still brings me a warm inner glow to this day when I occasionally put it on replay. Definitely up there with my other lifetime achievement of getting my “25 yards” certificate, which still takes pride of place o’er the mantelpiece.
Musically speaking, on the home front it was a time of Freddie and his Dreamers (he was a top football player, honest!),and The Herman Hermits; yesteryear’s answer to the Mondays and Roses. No doubt their 45 r.p.m.s were taking good hammering on the 7 stack mono Decca Lo fidelity Hi fi stuck on a chair in the corner of the room.
Well that’s a half -arsed attempt at some sort of social history insight ; whatevers….. Meanwhile back in the future….
Artefact added : 21st January 2012
by dubwise-er