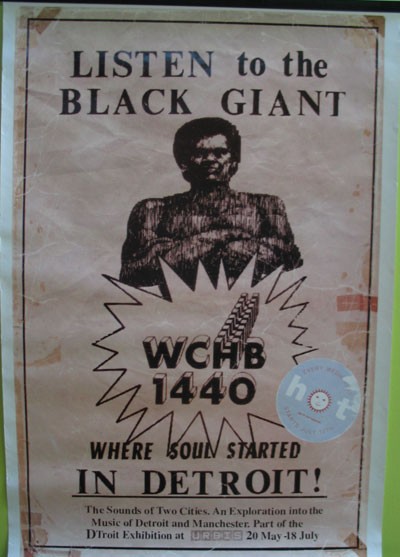 A poster I designed for Urbis to promote the 'Sounds of Two Cities' film. The film was made by Elliot Eastwick and myself and was an exploration of how the music of Detroit has affected the music and culture of Manchester. The film was fairly successful but I wish we'd had more time as it was a bit banged together, given more time we could have made it better. The film includes interviews with Mike Pickering, Derrick May, Anthony Wilson, Graham Massey, Greg Wilson, Graham Nash, Johnny Marr, Richard Searling and Doves.

With this poster I have used an image from a 1970s Detroit soul magazine, advertising a radio station and a Dj - 'The Black Giant' and put a Hacianda 'Hot Night' sticker over it, as these stickers were stuck everywhere around Manchester in the late 80s - I don't think there was a lamp-post in town without one! I wanted to combine a strong image from Detroit with an iconic image from a well-known Manchester club night (and a night where tunes from Detroit- such as 'Strings of Life' were very popular). I tried to make it look like someone had stuck the Hot sticker on an old poster.

Unfortunately after only a couple of days of the poster being put up around town a council member saw it, and as the posters had been illegally fly-posted (and Urbis is council funded), insisted that no more were put up. I don't know what happened to them, I guess they got destroyed!
Artefact added : 5th June 2007
by mat

Abigail Says –
Great story - I've still got one of these posters.
If you'd like to leave a comment, please Login. Login
Manchester Digital Music Archive is licensed under an
Attribution-NonCommercial-ShareAlike 4.0 International License.
Charity no. 1164179
Our archive currently contains 3814 Bands, 743 DJs, 1438 Venues, 298 Industry Professionals and 28520 artefacts contributed by 3925 members.