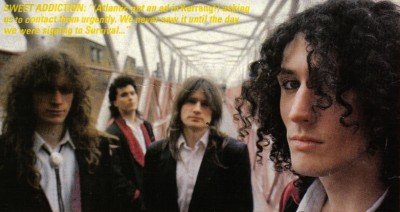 The SWEET ADDICTION story began in 1986 after singer Matt Wolff and guitarist Dave Airey had met at school and spent a couple of years writing songs. Together with drummer Gavin Hardman they had all been in various local Manchester bands, and started jamming.
The songs were good, but money was tight and Matt took up the offer of a job in Brighton. Dave decided that without Matt's great voice there would be no show, so after a couple of months he drove down to see him determined to get him back into music.
Matt was already fed up and longing for Manchester. He sang well with Dave and they hatched a plan to form a band that might just have a chance of getting drunk for free.
Back in Manchester Matt & Dave started writing songs with Gav, who brought along a friend to play bass - Russell 'Joe' Johnson.
The rehearsals were electric, and SWEET ADDICTION were born.
The music was raw, powerful blues rock.
As part of their first UK tour to promote 'Mayfair', the Quireboys were playing Monroes, a glitzy dive in Stockport - a local gig for the Sweets. Pitching themselves as support, the band were convinced the Quireboys would like what they heard and put in a good word with their label, Survival. They were right, and Quireboys frontman Spike invited them down to London to play Gossips, a notorious psychedelic bar left over from the 60's, and smack bang in the middle of Soho.
The gig was packed.
The rock press had started picking up on SWEET ADDICTION and reviews were positive.
SWEET ADDICTION went on the road, playing every gig they could get their hands on. They slept in the van if they slept at all as they relentlessly toured around the country where the live shows became heaving rock 'n' roll parties.
They were rewarded with a week in Picnic Studios, Kent, to record a single for Survival, who had sold the Quireboys to EMI and were looking for another band. A&R man Dave Rome Bought the band new gear and rented them a big run-down house in Withington, South Manchester with a rehearsal space in the cellar. The house was always full of friends, drunks, girls and weirdo's but rehearsals were non-stop.
The first single "ALL I WANTED TO DO" was recorded with Dogs D'Amour and AC/DC Producer Mark Dearnley and engineered by Tony Banks.
Dearnley was cool, and the band still maintain that these sessions were the only time their live sound was really captured in the studio.
B-Sides were recorded live in Manchester and at Big Noise Studios, London.
A black and white video was shot in a West London warehouse.
They immediately set off on another tour, supporting Balaam & the Angels. By now the band had worked their set into a bunch of great rock 'n' roll tunes. Audiences were bigger and press, TV and radio hacks bought them drinks at The Marquee and the Astoria, with all night sessions at the St.Moritz in Soho. By the time they got back to Manchester, everyone on the rock scene was talking about SWEET ADDICTION.
Life was good.
Back in the studio on the strength of a great tour, SWEET ADDICTION cut their second single for Survival, 'CAUGHT ON A LINE'. Dave Rome was impressed with the way things were going and booked Rockfield Studios in beautiful South Wales (a legendary studio - Queen had recorded 'Bohemian Rhapsody' there).
The band were hyperactive after nearly a year of relentless touring and sessions were erratic. Everyone was drinking heavily and chaos reigned. Then the great Stevie Ray Vaughn died suddenly as the single was being recorded. The boys sobered up and wrote and cut a blues tune for the B-side - 'I'm Doin' Fine' - as a tribute. The A-side shaped up with harmonica and slide guitar, and Dave put down a killer ballad, 'Hurt This Way'.
Back on the road, they toured with labelmates The Grip.
SWEET ADDICTION were flying, and were booked to appear at the 1991 Cumbria Rock Festival, alongside Marillion, Blackfoot, The Almighty, Atom Seed, Cheap And Nasty, FM, Jagged Edge, Loud, Lisa Dominique and Dumpy's Rusty Nuts. 20,000 people came to rock, and SWEET ADDICTION didn't disappoint. Tommy Vance interviewed the band after a fantastic set, which was broadcast on Radio One and lead to a live session on the Friday Rock Show.
A headline tour was booked, and venues like the Marquee and Rockworld in Manchester were sold out for double weekend shows. They played the London Hippodrome and guzzled champagne with Andy McCoy, guitarist with legendary glam rockers Hanoi Rocks. More TV followed. The video for 'CAUGHT ON A LINE' was getting rotation on MTV and Matt & Dave played a live acoustic set from The Marquee for ITV . Gigs went well, and the single grazed the top 100.
Survival had been talking to BMG Records, the German heavywieght that had just bought RCA. BMG wanted in on the next single with an option to record an LP...
'ENOUGH IS ENOUGH' was recorded at Battery Studios in the heart of London with (Weird Al Yankovitz lookalike) Chris 'The Vibe' Tsangerides at the controls. The band went back to their roots with a blistering live version of The Who's 'The Seeker' on the flip.
SWEET ADDICTION toured again, playing to rocking crowds.
Survival A&R man Dave Rome started looking for a producer for the album. Stephan Galfas, who's work with Meatloaf, ELO and countless others the band had admired, flew over from the US to meet them. They worked well together and booked into Jacobs Studios, Surrey, to start recording 'All The Fools In Town...Are On Our Side'. Twelve songs - some live favourites, the rest new - were put down with keyboard player Lee Horsley joining our heroes on piano and Hammond organ.
Artefact added : 3rd February 2012
by MattWolff