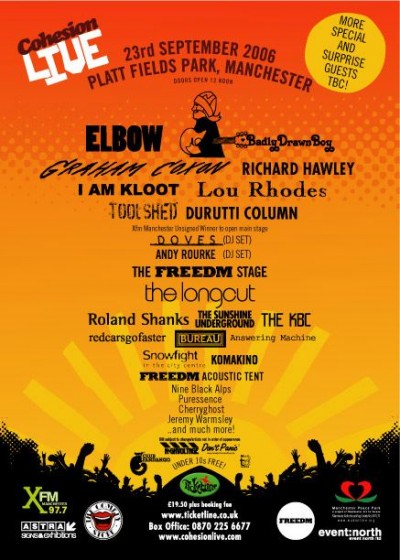 The Cohesion Festival was held in Platt Fields on 23rd September.

The event was organised by Manchester Aid to Kosovo and was essentially a benefit gig to raise funds to complete the Manchester Peace Park in Kosova.

Performers on the main stage included established Manchester acts such as Badly Drawn Boy, Elbow and I Am Kloot and honorary manc for the day Graham Coxon.

Newer bands like The Longcut, Komokino, Snowfight In The City Centre and The Answering Machine all performed on the 2nd stage.

the_daze Says –
I went to this gig with my then-girlfriend of four weeks, as a reciprocation for her taking me to see Devendra Banhart a couple of weeks before.

I particularly wanted to watch Nine Black Alps but inevitably we arrived late, just in time for me to hear "We've been Nine Black Alps, thank you & goodnight". Bugger.

Elbow, however, played a good one. I'd been banging on to her about how great they were live and I'm glad they didn't let me down! This was not long after "Leaders of the free world"; she later said her abiding memory of their set was me singing along rather too loudly, in her ear.

Badly Drawn Boy was headlining. This was his "Born In The UK" phase, not playing much of the first album stuff and to be honest, he put in a fairly lacklustre performance. Apologies to Damon Gough if he's reading this, but I've seen you do better gigs, sir. We wandered off for a bit to watch The Longcut who were good at what they were doing but suffering from a very small crowd while DBD was on.

I have very fond memories of this gig, because she & I are still together and often recall it as one of our best memories together.
If you'd like to leave a comment, please Login. Login
Manchester Digital Music Archive is licensed under an
Attribution-NonCommercial-ShareAlike 4.0 International License.
Charity no. 1164179
Our archive currently contains 3873 Bands, 759 DJs, 1464 Venues, 323 Industry Professionals and 29805 artefacts contributed by 4067 members.